In this blog post, we will explore how to start and access a Linux Docker image with a graphical desktop and access it remotely using VNC.

In the course of the blog post, we will

Note that if your Docker host is running X11 and local access to the container desktop is sufficient, there are solutions without VNC server; see e.g. the blog of Fabio Rehm. In our case, we would like to be more flexible and run the Docker host on a remote infrastructure (AWS in my case). We will see that this is not a complex task either, if we re-use existing Docker images from Docker hub.

Step 1: find an image, which offers the features you need

I am looking for an Ubuntu Docker image with access to a graphical desktop, with the following features:

I have searched Docker images with keyword „vnc“ on the Docker Hub. I have found 2 popular images (11 stars each, > 1k downloads):

Note: while writing this post, I had failed to sort based on downloads or stars. Otherwise, I would have found the images dorowu/ubuntu-desktop-lxde-vnc or vvoyer/docker-selenium-firefox-chrome with 44 stars each and 10k+ downloads.

The latter image has a more elaborate readme file, so I have chosen this one (moreover, I know someone from Consol, which is a second reason to choose that image).

Note that this step is optional, since a docker run command will automatically pull the image, if it is not found in the local image repository.

Step 3 (optional): Get acquainted with the image

In order to get acquainted with the image, I have started the docker image in interactive mode (-it) with a bash shell:

I have received many CRITICAL xfce4-session error messages during startup. However, even without manually starting the server, the graphical desktop as well as the VNC server were started automatically and they seem to work fine, as we will see below. Moreover, the CRITICAL messages might have been caused by using „bash“ as a command option of the docker run command. This will overwrite the CMD option „–tail-log“ of the image’s Dockerfile.

In my case, I am accessing the instance via Internet. In order to find the public IP address of the instance, I could access the AWS management console. However, I prefer to show a method that works in other environments as well. The Docker image has installed curl and wget, so we just issue the following wget command:

The returned information now can be used to access the system via the noVNC http access, in our case via http://52.28.184.18:6901/vnc_auto.html?password=vncpassword: 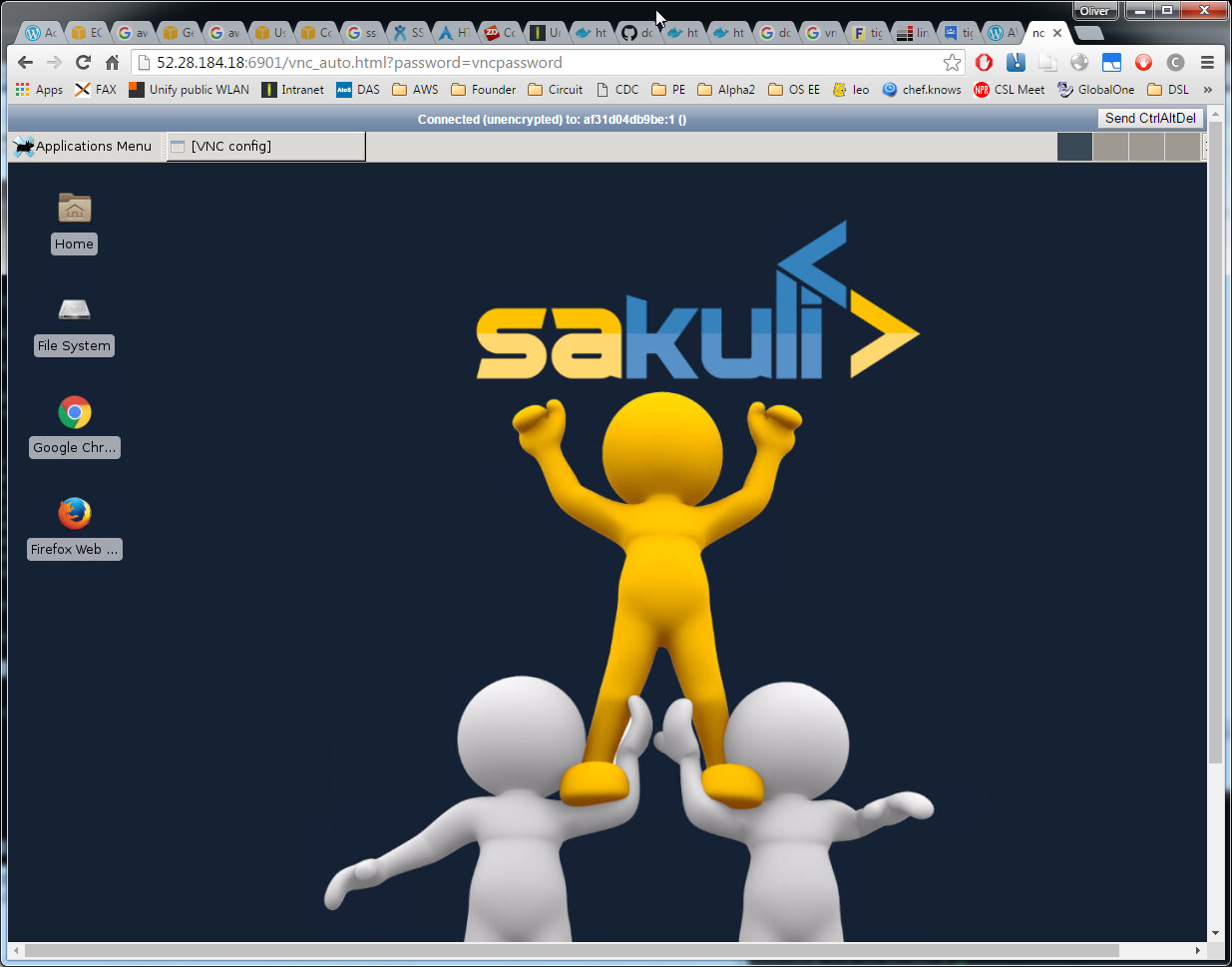 That was not hard.

In this case, I will not get a console session to the container, but I still can connect to the container via VNC. For that, retrieve the public IP address with the following command again

Here „host“ must be replaced by the IP address you have received with the wget command.

Step 5: verify the automatic restart of the daemon

After a short time (< 4 minutes), we can re-connect to the Docker host image and check the Docker containers. We see that the Docker image has been started automatically:

Appendix A: Customizations of the Consol/Sakuli image

After a long time, I have remembered this post and wanted to make use of the Consol/Sakuli docker image. There, I found out that neither cut&paste nor the Tab command completion in the terminal window has worked. I have found a workaround describes as last comment on this forum (scroll down to the post from October 23rd, 2012, 07:09 PM):

-> in case of a Docker image, we can perform following commands

where CONTAINERID must be replaced by the container ID you find in the docker ps command. Now you can reconnect via VNC (e.g. refresh the noVNC page in the browser) and the tab will work.

Up to now, we have tested an off-the-shelf Docker image in order to get remote access to a graphical Linux Docker container. However, most likely you will need your own (graphical) software installed on the container. Instead of installing the software every time after you have started the Docker container, it makes sense to build your own Docker image that contains the software you need.

Step 6.1: On Github, fork the build files for the Consol VNC image

Since we intend to change the Dockerfile, we will fork the Consol VNC Dockerfile & Co from their Git Source repository. As with every automatically built Docker image, the link to the source repository can be found on Docker Hub. As a GitHub user, fork the repository.

TODO: test how to build the docker image from the repository

Step 6.3: adapt the Dockerfile and re-build the image

TODO: Choose some graphical software, e.g. the NetBeans SW, add the apt-get commands to the Dockerfile and build the docker image as shown in the blog of Fabio Rehm.

TODO: start and connect to the image, start the software and take a screeshot

We have shown how easy it is to load an existing Docker image from Docker Hub and remotely access its graphical desktop, if the image has VNC installed.