This is part IV of a little „Hello World“ example for Ansible, an IT automation (DevOps) tool. This time, we will get acquainted with Ansible Tower, a web front end for Ansible. The post has following content:

Posts of this series:

Why not „Installing“ Ansible Tower via Docker?

In parts I to III of this blog series, I have made good experience downloading Docker images from Docker Hub instead of installing the software in question. This is, how we had „installed“ Ansible and Saltstack. Also this time, I have tried to do so, but the attempts were less successful. I have tested following images:

At this point, I had given up following the Docker path for now, even though there are many other public Ansible Tower images on Docker Hub I could test. Instead, I have found that installing Ansible Tower on a VirtualBox image by using Vagrant is a very convenient way of tackling the installation part. It is recommended for proof of concept purposes only, but it is an officially offered way of creating an Ansible Tower service; see this official documentation.

Step 1: install Ansible Tower via Vagrant and connect via SSH

Following this instructions, you can issue the following commands in order to download, start and connect to the Ansible Tower image:

As an addition to the official documentation, I have added the second command. The download might take a long time,  and the next command will require your attention.

give you some time for a long coffee break, while the next command requires your immediate attention: I had been prompted for the Administrator password twice. If you fail to provide the password in time, you might come back from the coffee break and be surprised by an error with a message like: VBoxManage.exe: error: Failed to create the host-only adapter.

We closely follow the official quick start guide with a minor adaption at step „4. Create the Credential“ below. This is, because Vagrant does not allow for password login of the root user.

We now can connect via browser to http://www.ansible.com/tower/ and log in with the credentials: 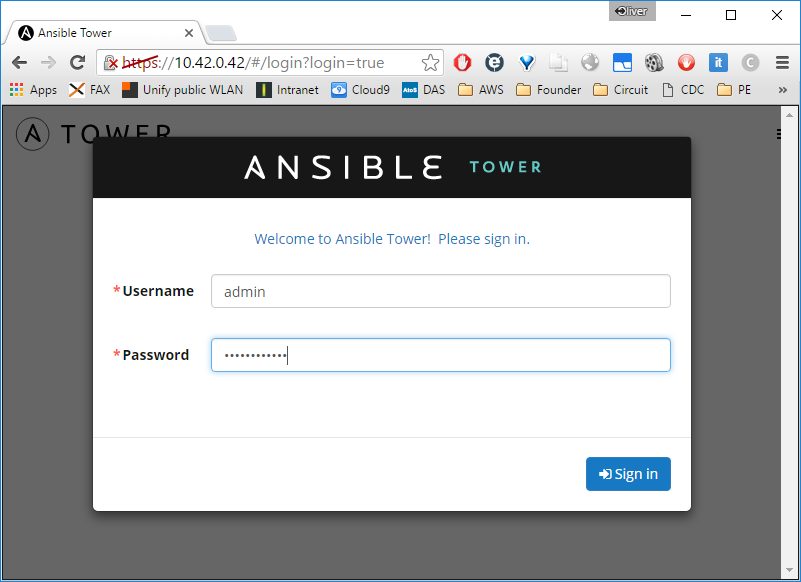 Since we are logged in the first time ever, we will be provided with a pop-up like follows: 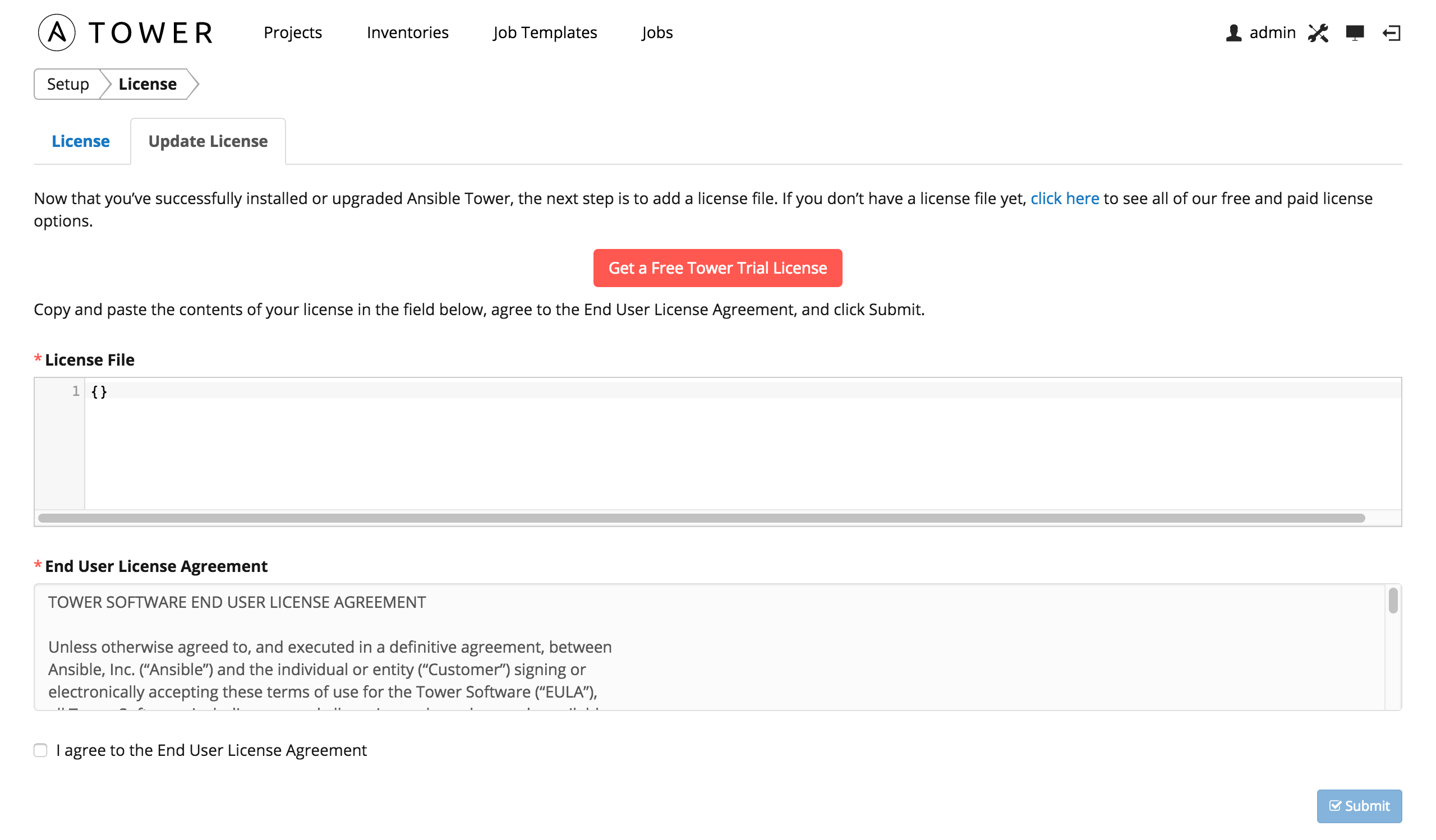 Click on „Get a Free Tower Trial License“ and choose the appropriate license version. I have applied for the permanent free license for up to 10 nodes, and I have received an email from support@ansible.com with the license file. You can either drag&drop the license file to the browser, or you can copy the license file content into the corresponding field,  so the content of the License File field looks similar to:

After checking the „I agree …“ checkbox and submitting the form, you will be rewarded with a License Accepted pop-up window: 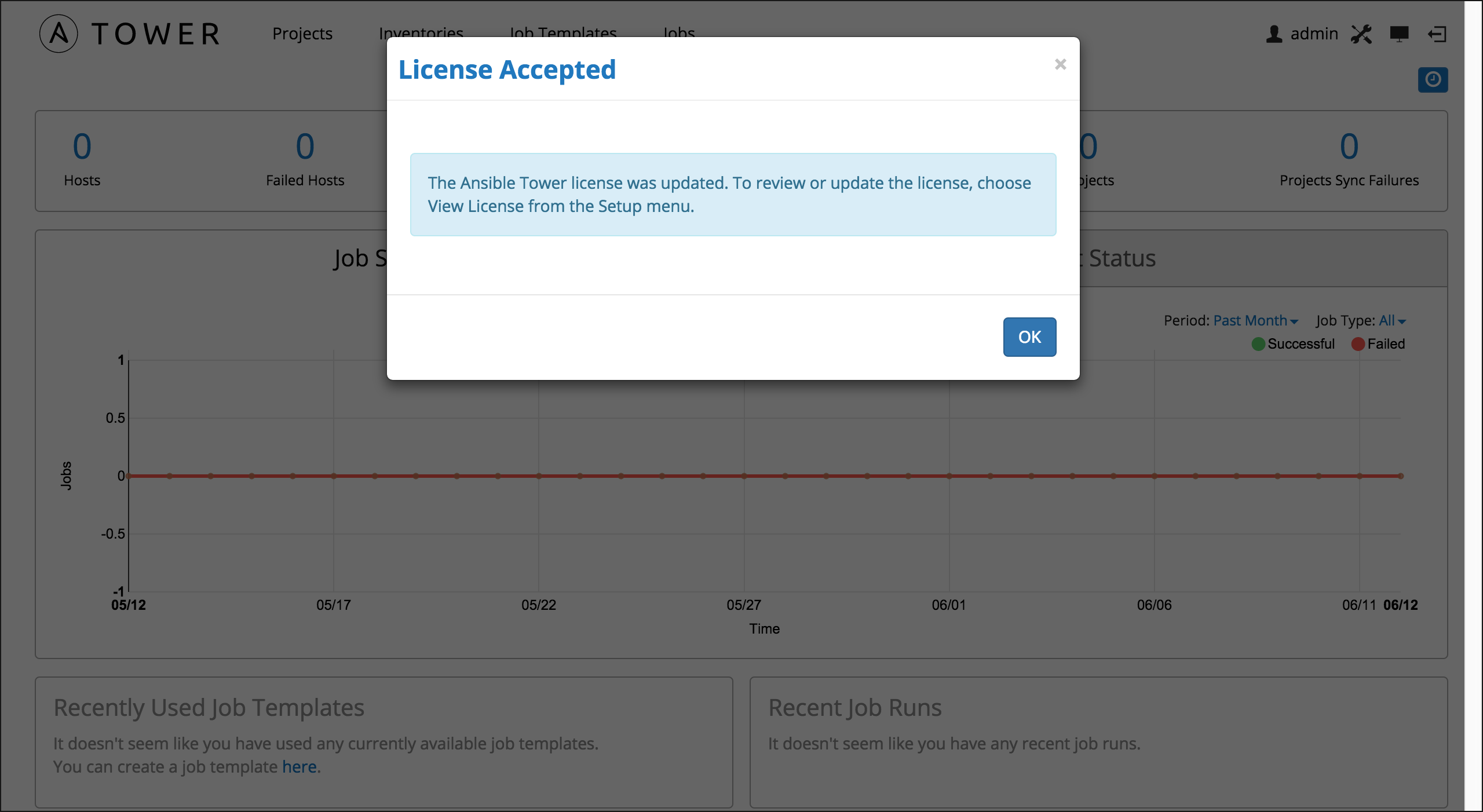 After clicking OK, you will reach the Dashboard: 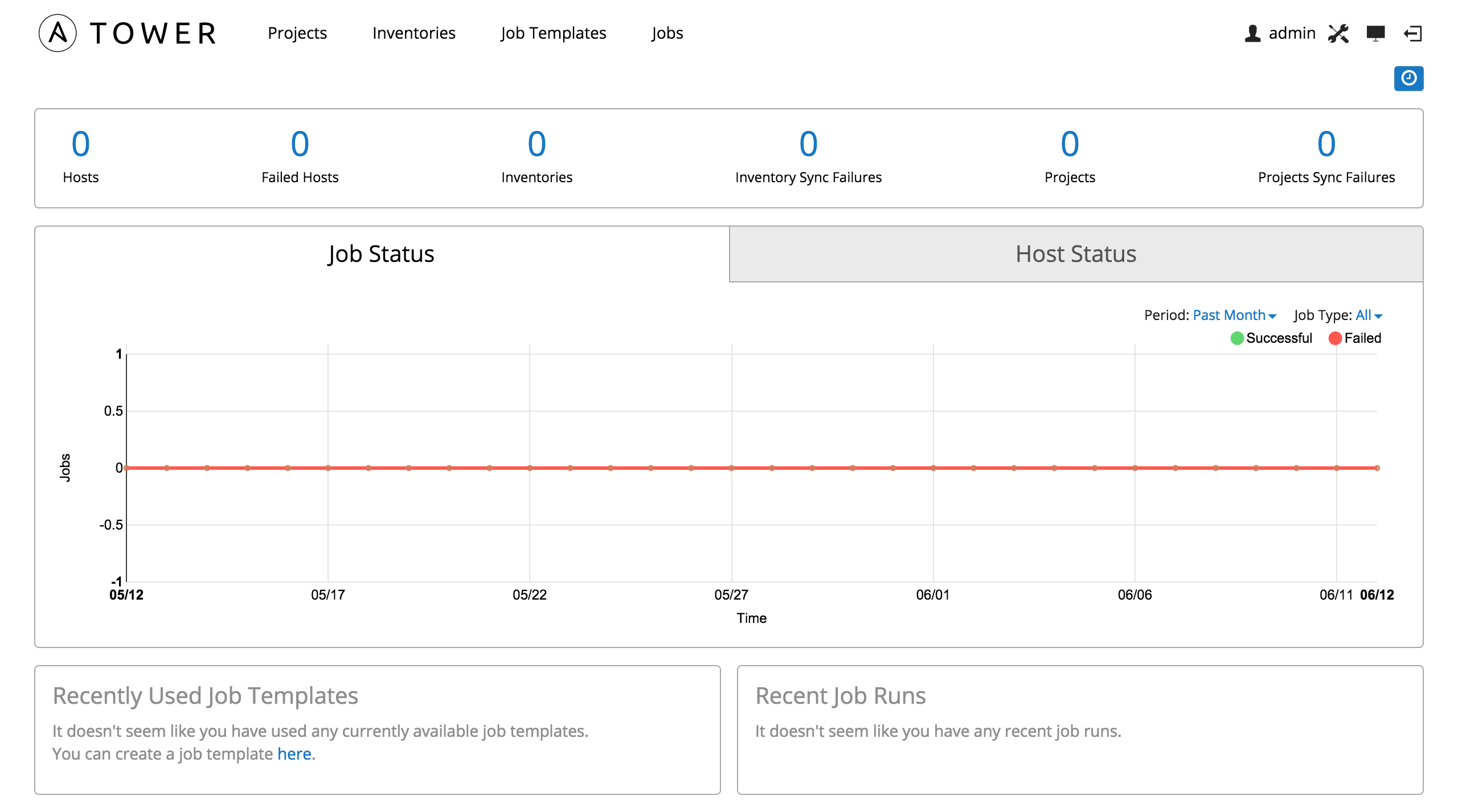 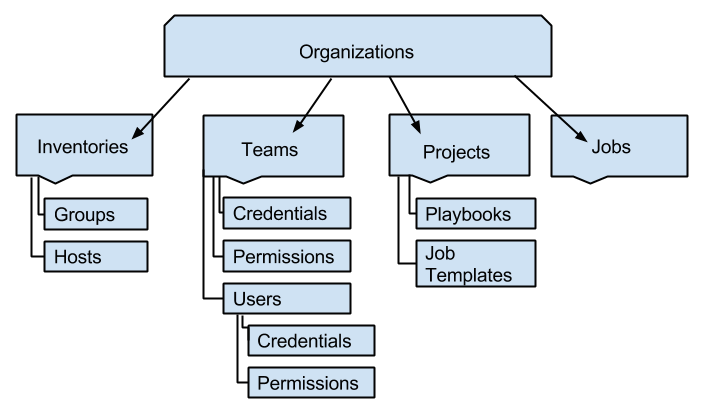 Note that (at least for new versions of Ansible), users can be directly attached to an organization with no need to create a team. The same holds for inventory groups. Let us get rid of those and perform a „Hello World“ in following simplified model: 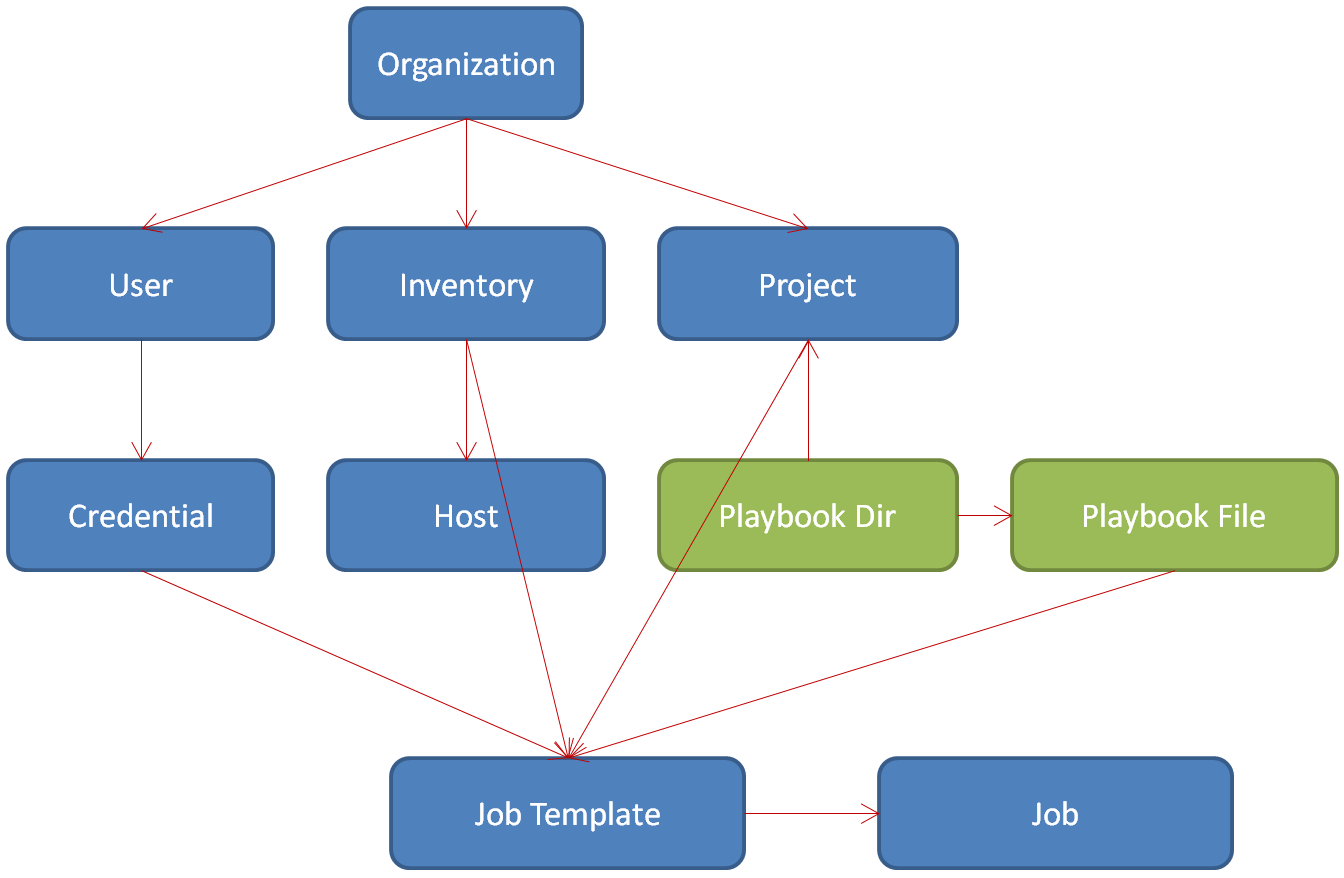 Okay, the figure might look slightly more complex than the one in the Ansible Tower documentation. This is, because I have added all mandatory parent to child dependencies, similar to the Unified Modeling Language notation.

Note: In the Ansible Tower model, each child has only a single parent, while each parent can have an arbitrary number of children. The only exception I have found so far are the Projects: each project can be assigned to one or more organizations.

As in the real world, you need to follow the arrows, if you want to reach your goal:

The official quick start guide goes through this model like follows: 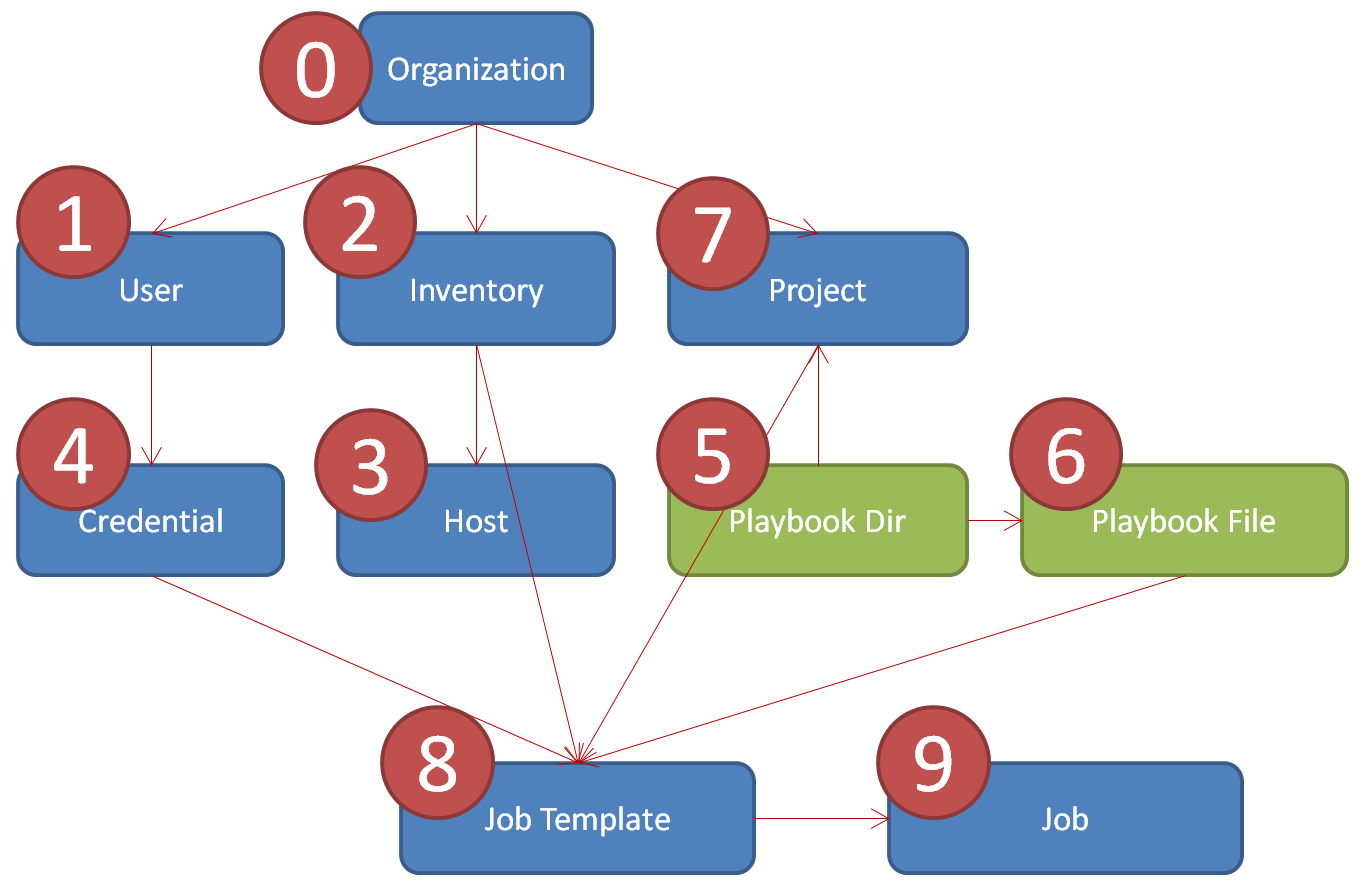 Let us follow the same order. Nothing needs to be done for the organization  („Step 0“): a „default“ organization exists already. So, let us start with Step 1:

This will lead to following result: 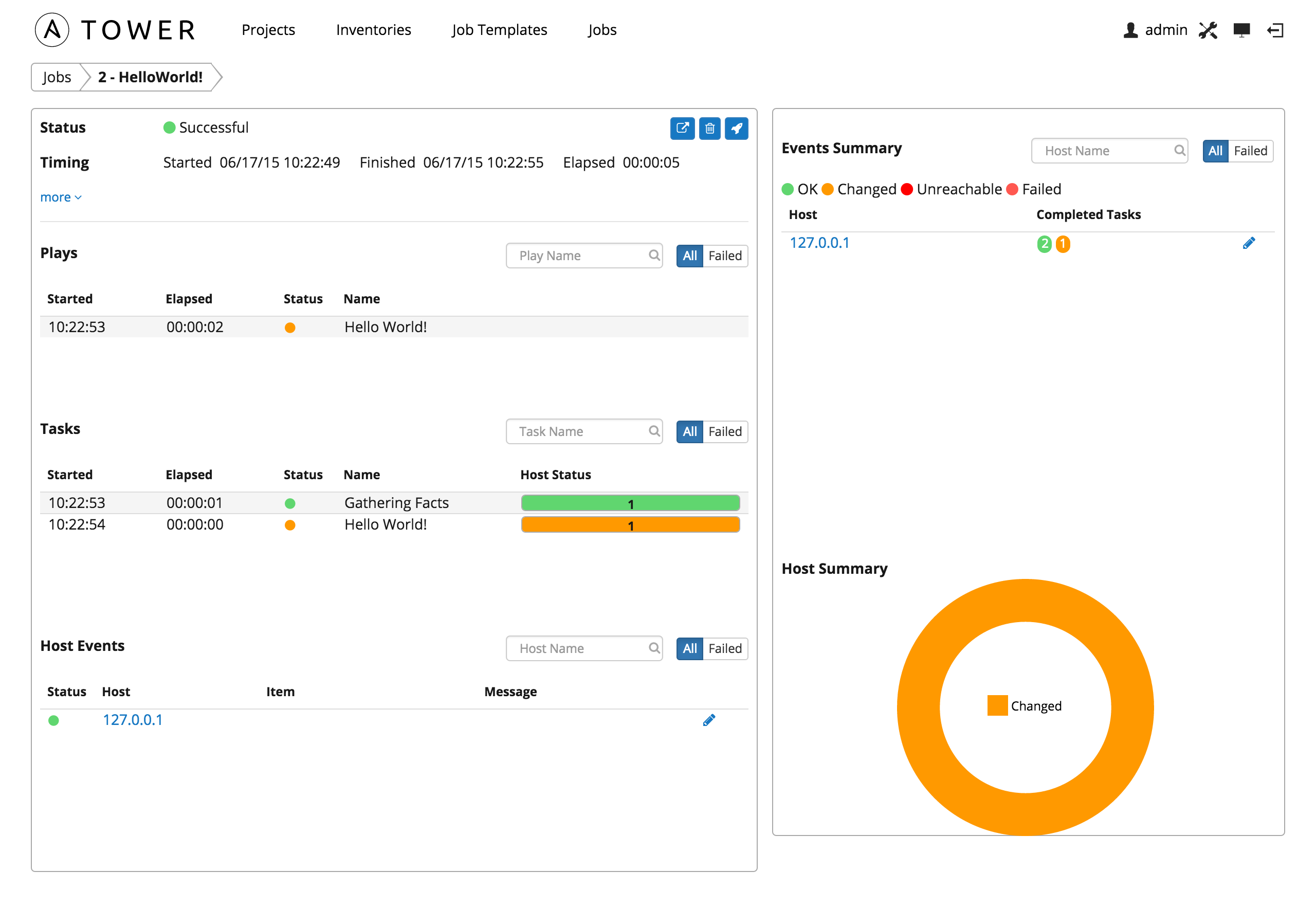 The command line output can be checked by clicking the

When we compare the many steps needed to run a simple „Hello World“ example we could have accomplished on the command-line in less than half of the time (see e.g. part 1 of this blog series), we could ask ourselves, why someone would like to use Ansible tower at all. The main reasons (as I see it) are like follows:

In this blog post we have shown how Vagrant can help to quickly set up a local Ansible Tower trial. We have discussed the Ansible Tower object model in its simplest form, and could explain, why and which minimal steps are needed to perform a simple „Hello World“. At the end, we have compared Ansible Tower with simple command-line based Ansible (without Tower).