This blog is exploring a tiny aspect of this automation framework: the containerization of an application and the automatic creation of a Docker image from source code for a Rails Web application as target application. For that,

Next possible steps towards full CI/CD (continuous integration/continuous deployment) are discussed a the end of the blog.

Note: the procedure requires Internet downloads of >1 GB. If you are interested in a more lightweight „Hello World“ example with (probably) <15 MB of downloads during the process, you might be interested in this example: https://github.com/oveits/docker-nginx-busybox.

Here are the reasons, why I have chosen to containerize my web application using Docker:

In the docker host, clone the application’s repository and change the working directory by issuing following commands:

Note, that the Dockerfile is already part of the git repository, you have cloned above, so this sub-chapter is for your information only.

The Dockerfile describes the automation steps during creation of a docker image. Among others, the Dockerfile specifies

Now we will build the image. We assume that we have direct Internet access over a NAT firewall, but with no need to pass a HTTP proxy here. In case, a HTTP proxy is involved, note that both, the docker host as well as the container image needs to be prepared for that.

You will see in the log that a new image layer is created at each step. This may take a while.

On the docker host, stop any container that might be running on port 80 (check with „docker ps“, stop the container with the command „docker stop <container-id>“). Then perform:

Verify that the Web Server is operational

Now test the web server by issuing the command

on the docker host command line. The output should look like

The logs can be retrieved any time by repeating the „docker logs“ command. In case there was no output because the container exits right away (i.e. „docker ps“ returns a list without the running container based on the image provisioningengine_manual) and you want to find out, why, you can perform an interactive session:

In case you want to get access to the Linux shell in the container (in this case, the rails server can be started manually by issuing „rails server -p 80“), start a container with

Test the Link between Github and Docker Hub

Test the automatic build trigger by perform a change the master branch. In my case, I have created a new git repository branch, performed a set of changes (add a Dockerfile and others) and I have migrated back the branch to the master branch. However, for a simple test, you can also perform an online change and commit of the README.rdoc file on the master branch of your forked Github repository.

This should trigger a new Docker image build (this may take a while). Check the results on the Docker Hub Build Details tab of the newly created docker repository.

After some time, the Build Status should turn „done“. 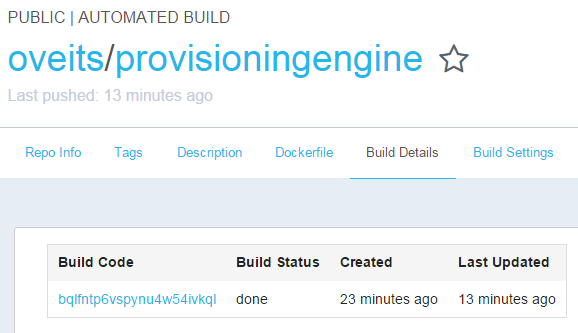 Check the container status and the logs with

And connect to the server by issuing the command

on the docker host. The answer should look like

Connecting from an Internet Browser

Docker networking can be somewhat confusing. With the

option of the docker run command above, we have instructed docker to map the container port 80 to the docker host port 80.

However, in order to reach this port, the IP address of the docker host must be reachable from the Internet browser, obviously.

On the docker host, find the IP addresses by issuing an

command. In my case, this results in an output like (abbreviated):

In my case, the docker host is a Virtualbox CoreOS VM running on a Windows host, created using Vagrant. The addresses of docker0 (is reachable only from docker containers running on the host) and eth0 (is a NATed Virtualbox network) are not reachable from the Windows host. Therefore, within the Vagrantfile, I had made sure that the VM is equipped with an additional Ethernet interface eth1 (host only Virtualbox network), that is reachable from the Windows machine. This is the case here:

If I want the docker host to be reachable from outside, additional care must be taken with respect to routing. Using a bridged network instead of a host only network can help here, but you can also create a static NAT/PAT within Virtualbox that maps the Window’s address to the docker host port.

We have shown how to automate the Docker build process by adding an appropriate Dockerfile to the application, save the application software on Github, and link Github with the Docker Hub image repository. Now, any time a code change is pushed to Github, a new Docker image will be built automatically.

Next Steps towards Continuous Integration

As a starting point, you might want to check out part 2 and part 3 of this nice post of Michael Herman, which gives an introduction on CI and CD based on the CircleCI framework.

Other CI/CD frameworks are discussed in the answers of the following posted question:

I guess, I will give TravisCI and/or CircleCI a try…