In this DevStack example, I will show how to install a DevStack-based demo OpenStack solution on an existing Ubuntu 14.04 server.

DevStack is an open source project with the goal to offer a development, test or demo environment for working with OpenStack. The compute nodes are based on QEMU, a software virtualization, so do not expect any high performance from this installation. However, it helps you to get acquainted with the handling of OpenStack, to get acquainted with OpenStack’s APIs and/or even to contribute to the OpenStack project.

In my case, I have used Hyper-V and the Ubuntu Server 14.04 ISO for installing a high-performance Ubuntu server on my brand new monster Predator notebook with 64GB RAM. Hyper-V requires Windows 10 Pro license as a minimum if you are not working with Windows Server licenses. However, you can also choose to install Ubuntu 14.04.x on physical hardware, on VMware vSphere, VMware Workstation, the old VMware Server 2.0.2 or on VirtualBox.

Note: there is a nice and simple way to install Ubuntu on VirtualBox using Vagrant, which I have described in step 1 „Install a Docker Host“ in this post. The Docker host Vagrant box is an Ubuntu 14.04 machine and the Docker software does not hurt. The biggest challenge there is to successfully install VirtualBox.

The following Software needs to be installed in addition on Ubuntu:

At this point, I have created a snapshot (checkpoint) of the VM on Hyper-V, so I can go back any time, the installation fails.

In the moment, it is not clear, whether it is used during installation, but I have copied local.conf from devstack/samples to devstack, as the official documentation always talks about changing local.conf file :

Step 5: create a non-root user called „stack“ and log in as this user

Devstack does not run as root, so we need a non-root user. You might want to re-use an existing non-root user instead, but I recommend to create it like follows:

The user stack has no password, so we only can log in via su as root. In my case, myname is a sudo user, so I have loged in via the command:

This step is missing in the official documentation and had caused the installation script to fail due to wrong permissions. As user „stack“, navigate to the directory containing devstack and copy the directory to home directory:

The devstack repository is not large, but if you do not want to copy it, you also could change the file permissions by using a chown -R stack:stack devstack.

Now the devstack folder and its contents are owned by user stack and the installation script should run with no problems:

-> here I was asked for the password again, even though it is defined in local.conf already. I have not investigated yet, whether the Step 4 above is necessary at all. Just re-type the password you have defined in Step 4.

After ~50 minutes, we see following last message of the installation:

In this case, the command was running on a Hyper-V Ubuntu 14.04.3 server with only one core of the i7-6700QM CPU and only 6 Mbps Internet download bandwidth.

Unfortunately, there is no information given on what to do next. Therefore, I have had a look into stack.sh and I have found that Horizon should be available on URL http://hostname/dashboard/auth/login/?next=/dashboard/ where hostname is 192.168.178.111 in my case: 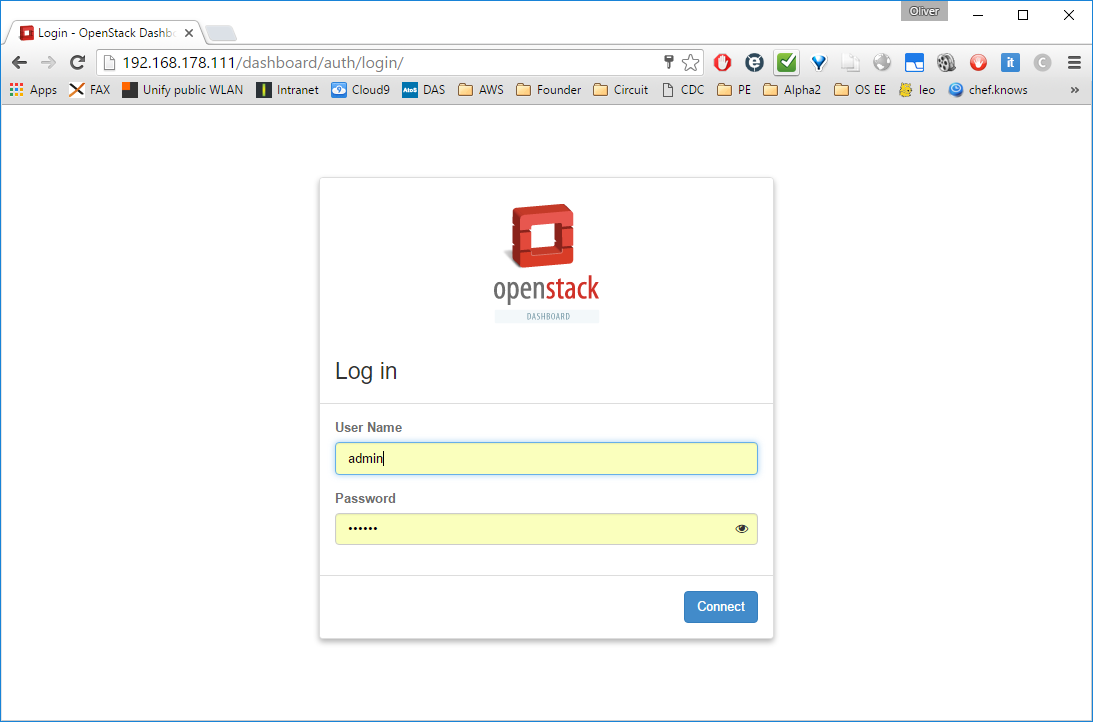 Yes, perfect! Horizon is up and running.

Per trial and error, I have logged in as user „admin“ with the password I have provided above and I have reached the Identity -> Projects screen:

Bingo! Time to play around!

On Admin->Hypervisors, we can see that DevStack has added a single QEMU-based Hypervisor with 512MB RAM on the base ubuntu machine:

and then on „Next“. Then we can choose the image, from which the instance will be built: 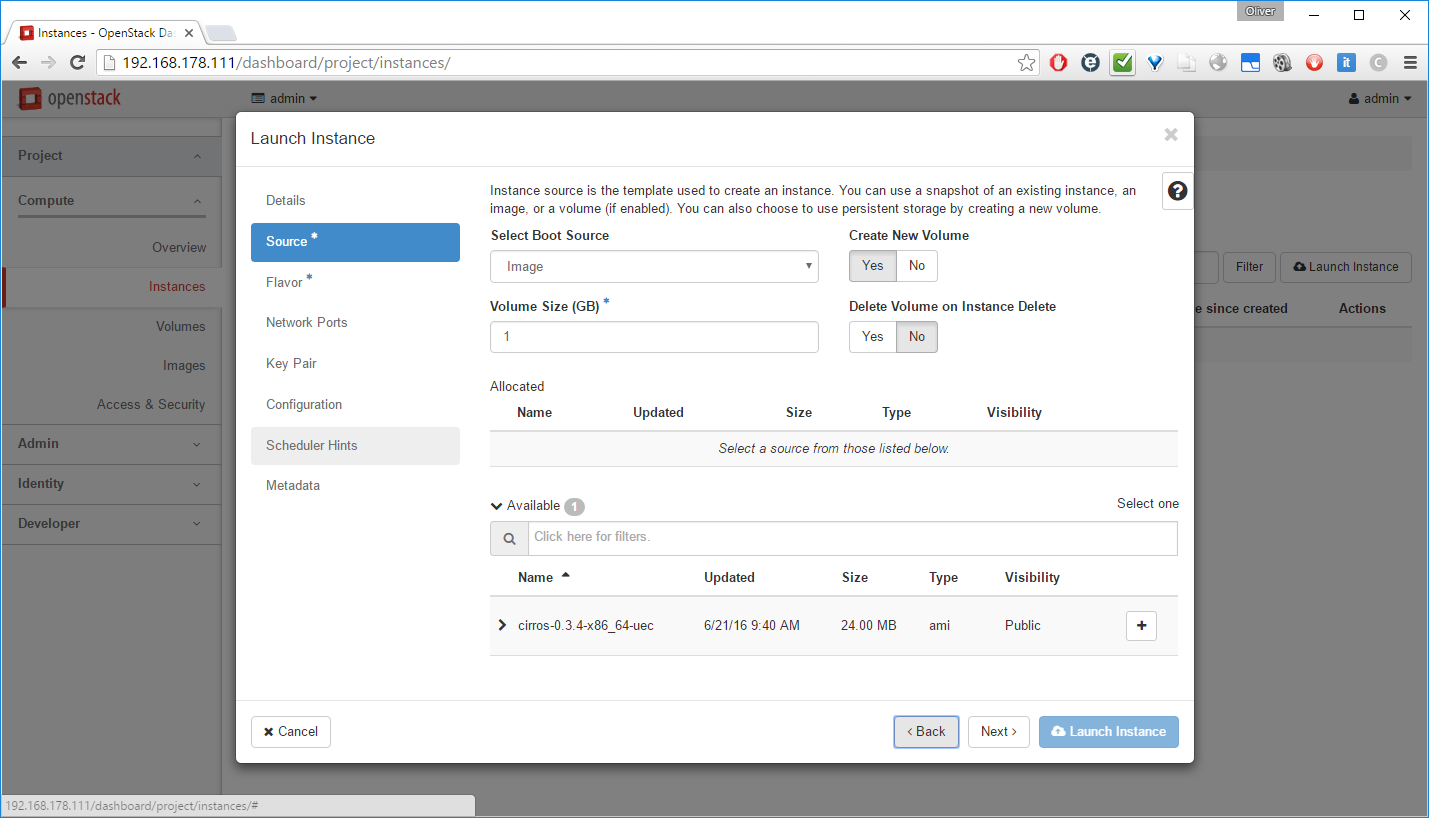 In the next screen, I have chosen the smallest flavor with 64MB RAM and no disk. Since the QEMU only provides 512MB, some of the other flavors should cause problems later on (can be tested later). 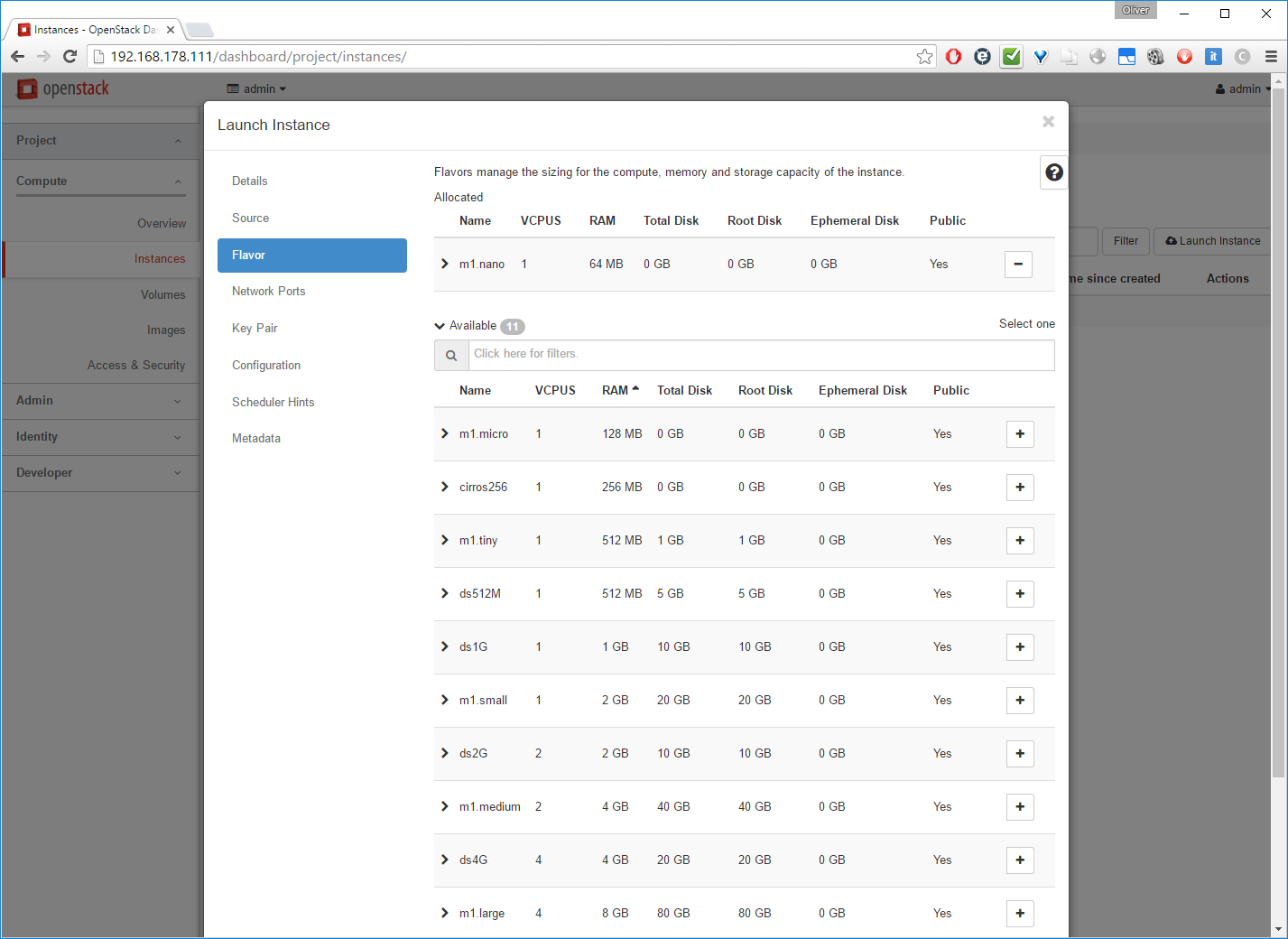 Let us skip the other steps for now and immediately create the instance by clicking „Launch Instance“ at the bottom of the screen (you might need to scroll down). You immediately should see a green box flashing with a success message: First, there will be a task „Spawning“, which will change to „None“ in a minute or so. At the same time, the instance Power state will be „Running“. 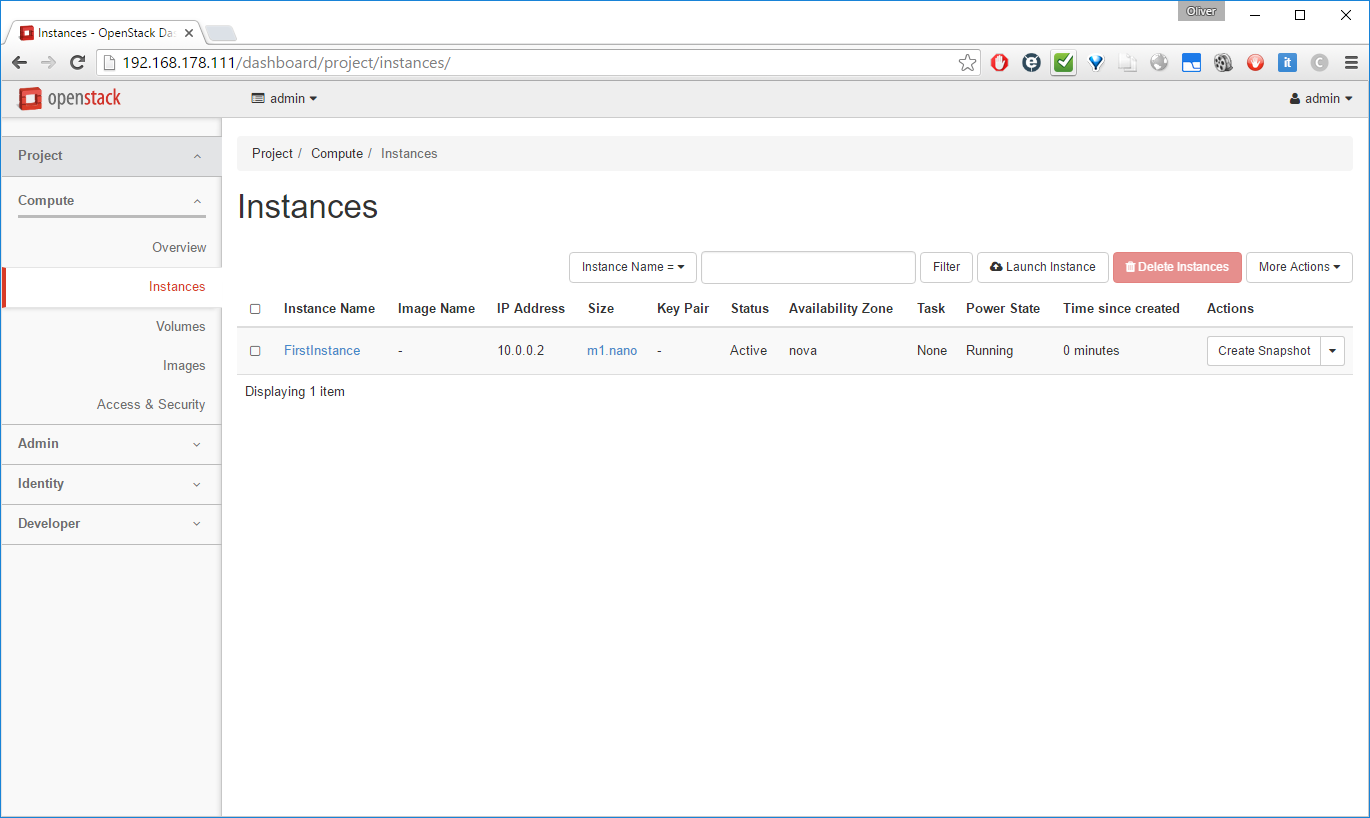 The instance is assigned a private IP address 10.0.0.2. However, is there a possibility to access the system?

Yes, from the Ubuntu system, you can ping the newly created instance:

However, without SSH key, we will not be able to SSH into the system; similar to AWS instances.

In 25 minutes, the German team is playing soccer in the European Contest, so I will stop now with a final dashboard screen: 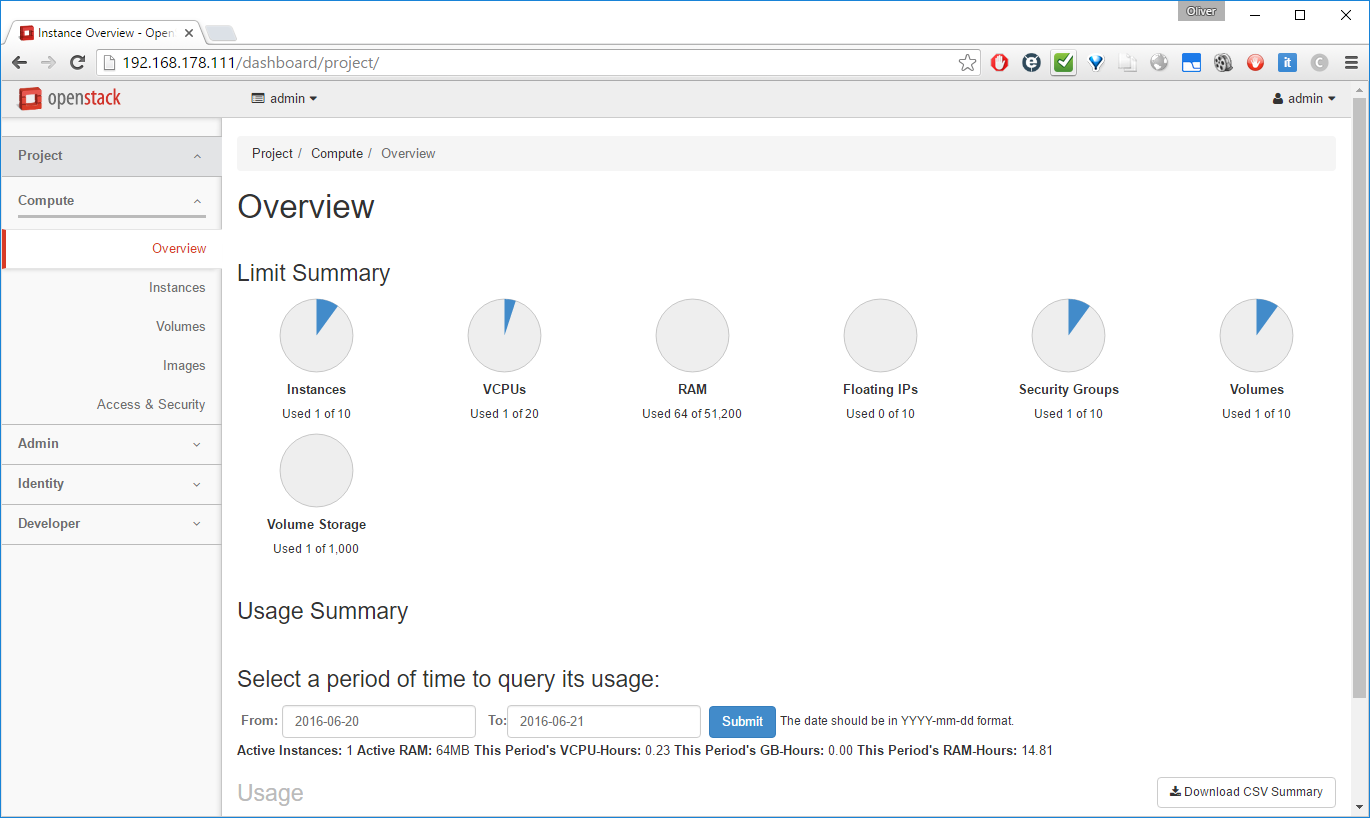 We have created and started a virtual machine (instance) on OpenStack.

After some days of OpenStack running with no interaction from my side, I could not log in to horizon anymore. 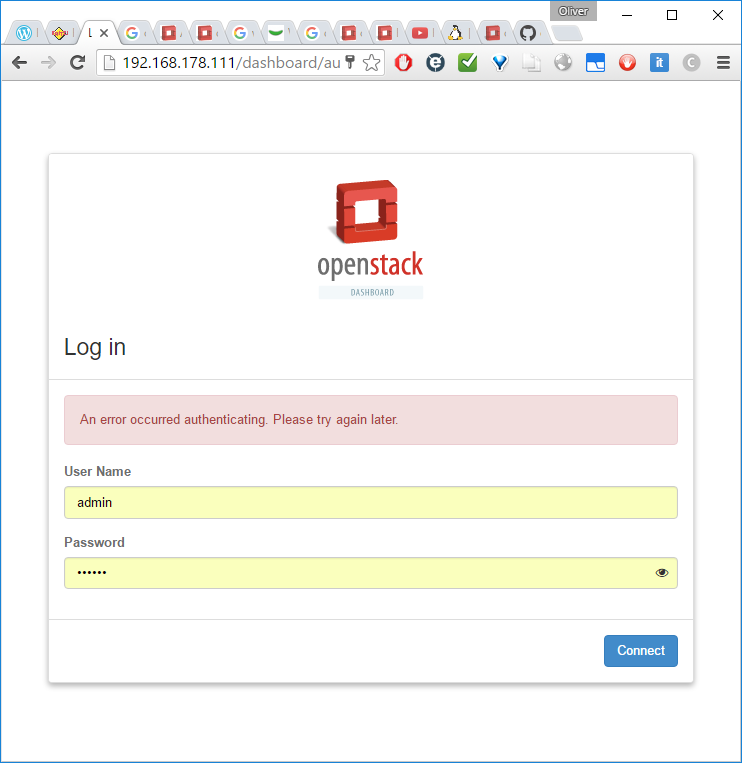 I have found this YouTube video with information on how to fix this issue. However, I could not find any shell script named rejoin-stack.sh, as required. I have re-installed devstack instead. For that, I have issued following commands:

I had to remove the keystone folder with the rm -rf command in order to avoid an Operation not permitted failure during the execution of stack.sh. The downside of this solution is that it takes ~20 minutes of re-installation time again. At the end, I got following information: 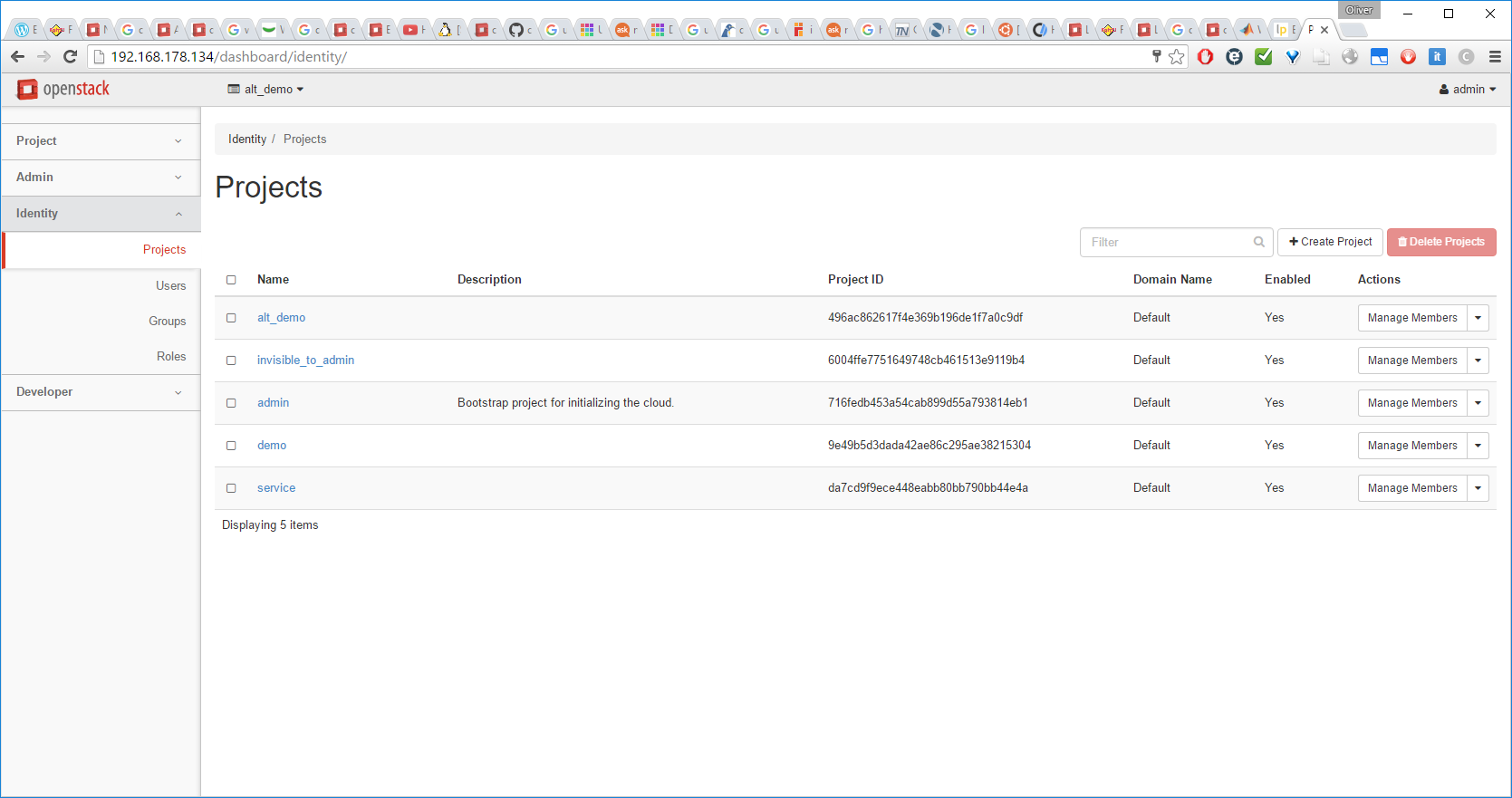