How to automate the configuration of network devices? Cisco APIC-EM (= Application Policy Infrastructure Controller) is a controller that can help us with that task. In this blog post, we will explore its modern REST API for accomplishing basic tasks like creating, reading, updating and deleting (CRUD) objects like

We will use the Chrome Postman plugin for exploring the API.

Click here to have a look at the summary section.

What is Cisco APIC?

See here a nice 4 minute Cisco youtube commercial about APIC. And here you find a Cisco live! 40 minute session, which gives a short overview. I will summarize:

Why should you install Cisco APIC?

If you still want to install it, the SW can be found via this DevNet page (use IE or Firefox; since Chrome is not supported; click on „3“). The SW is also available on Cisco’s SW repository. However, authorization is required there, while in DevNet, the access is less restrictive.

Instead of installing this monster application, we can also connect to one of the DevNet Learning Labs found in the DevNet Sandbox catalog.

Note that you need to register with Cisco, if you have not done already, either as a Customer or a Partner. In both cases, they want you to enter a contract number. I am a CCIE, so I already had an account.

See below more information on the pre-installed labs. 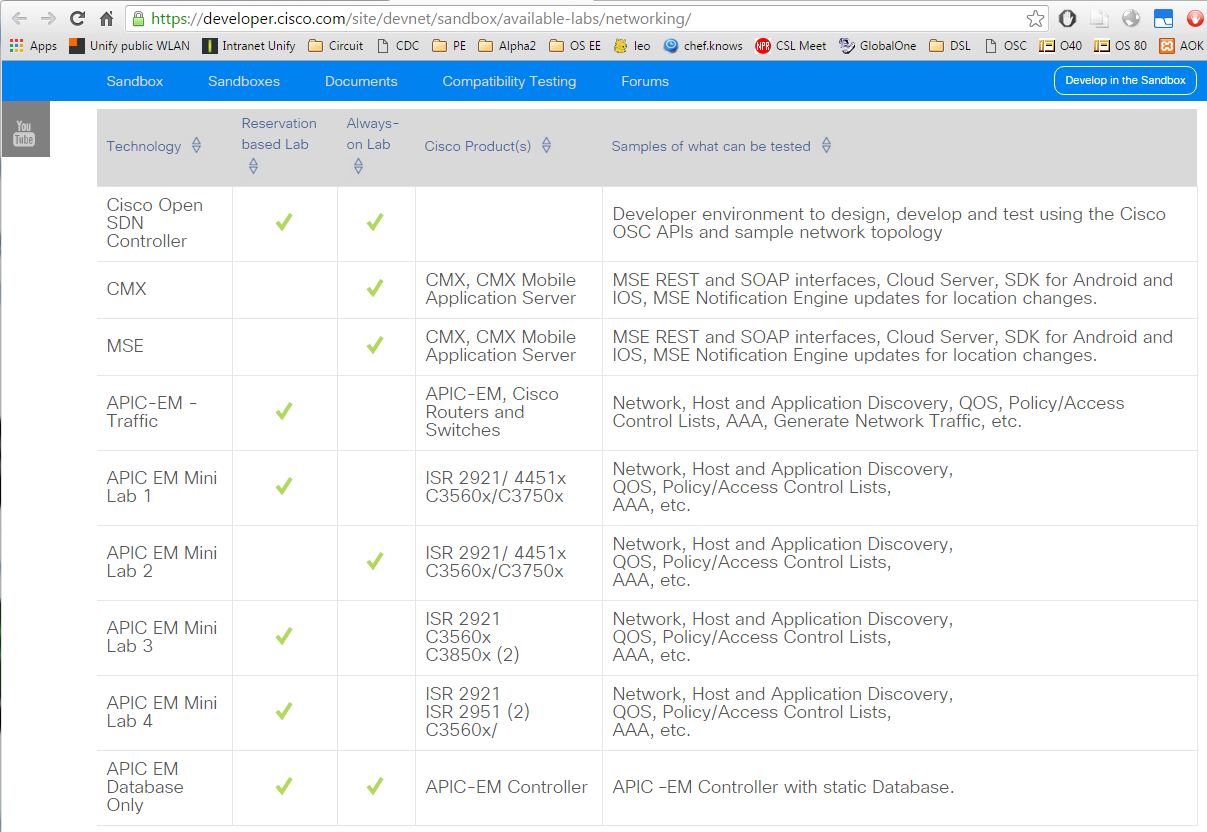 Most of the labs are APIC labs. When clicking on the „Develop in the Sandbox“ button on the upper right of the page, I reach at the lab catalog. 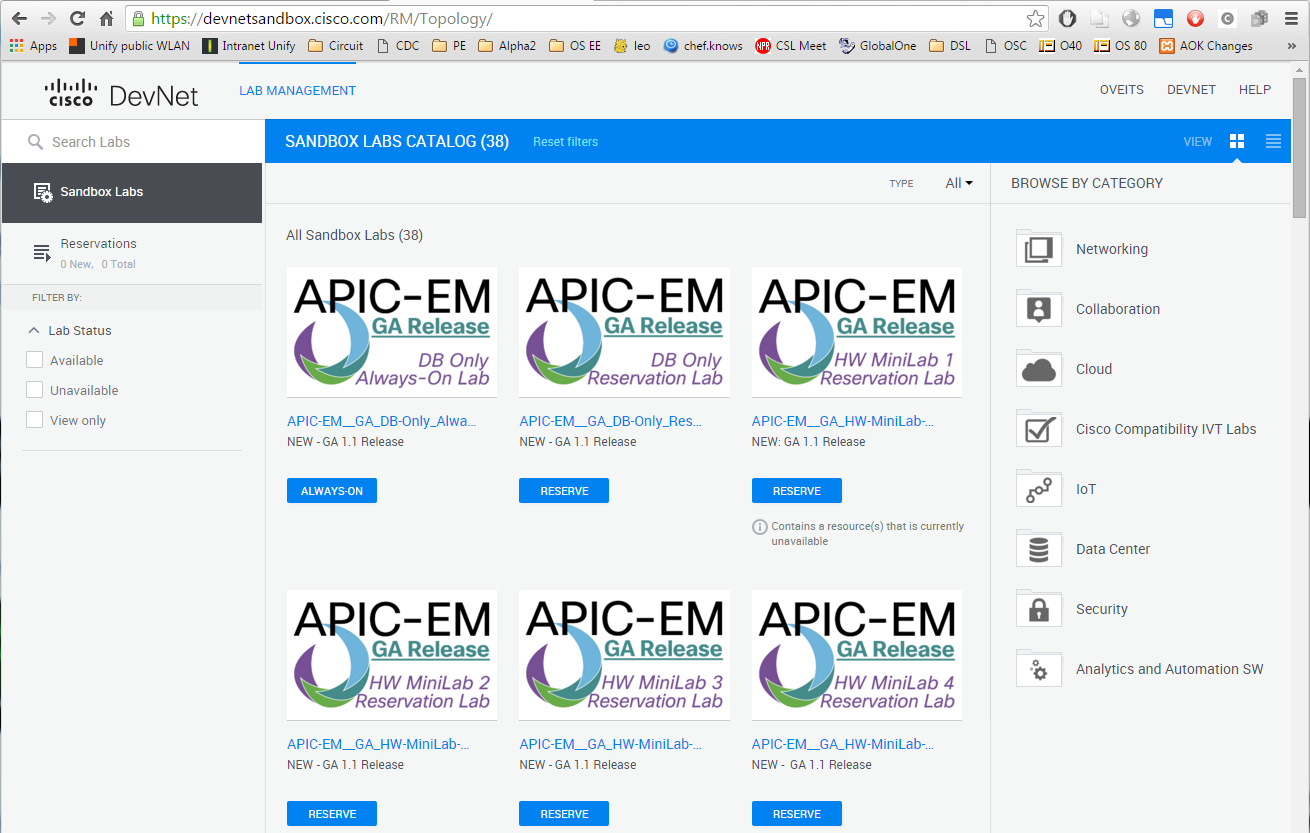 Let us keep simple, and try to enter the APIC-EM DB Only Always-On lab: this seems to be a kind of guided lab. Cool. 😉 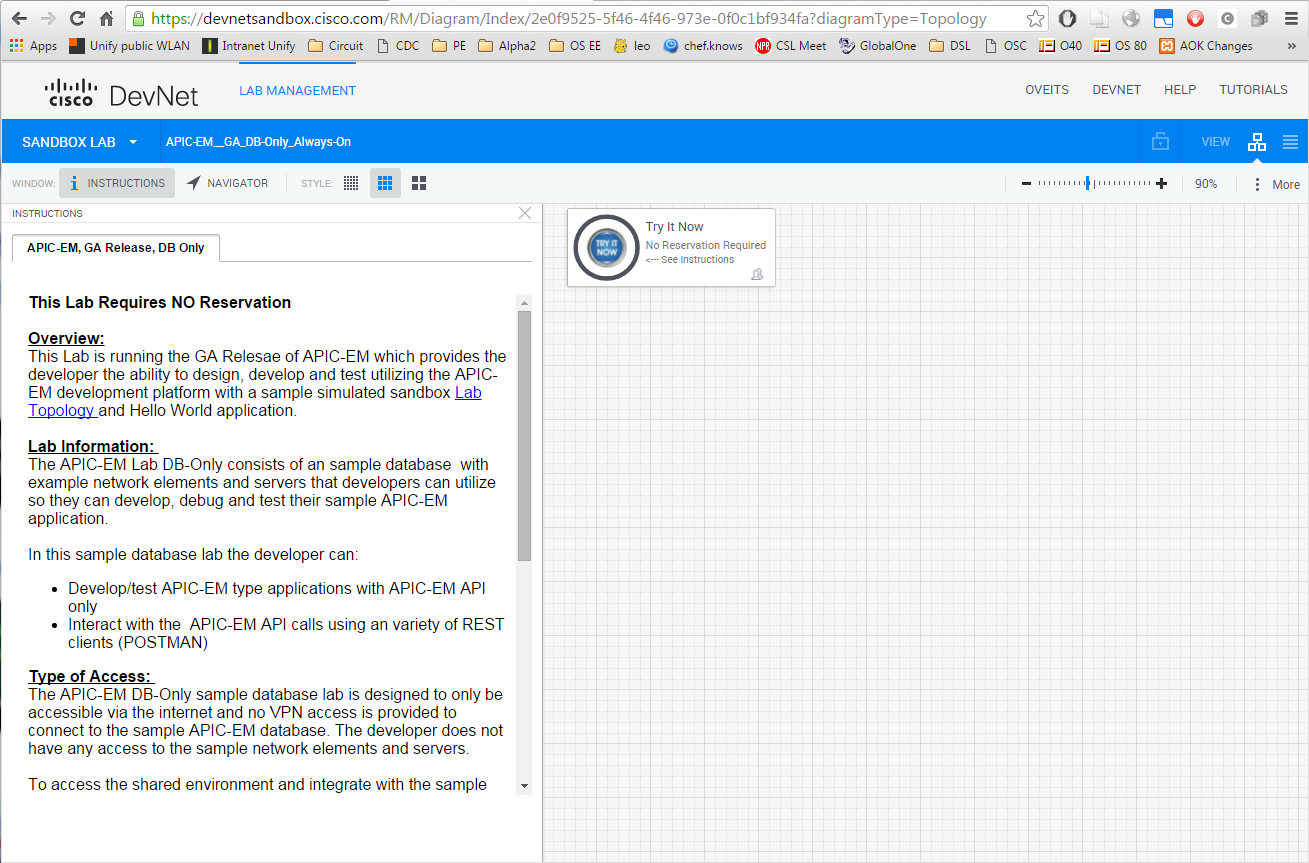 scrolled down on the left pane: 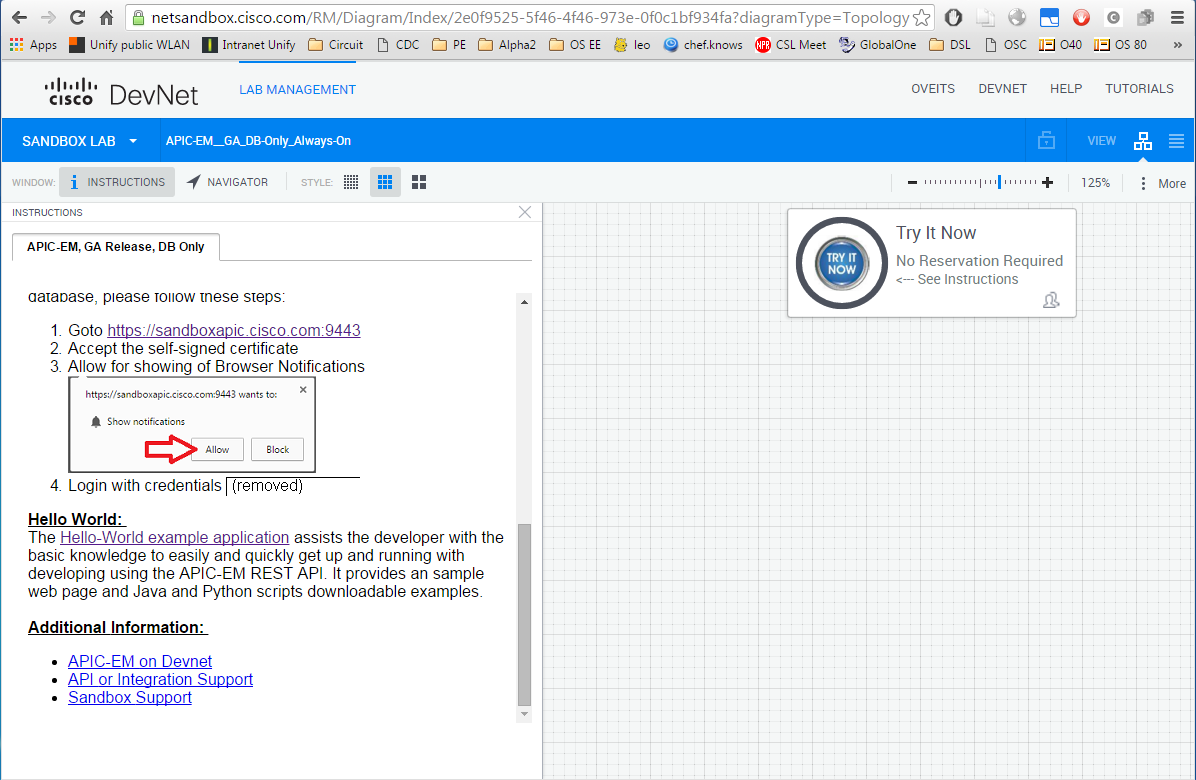 we find a link to the APIC-EM portal: https://sandboxapic.cisco.com:9443. There, I could log in with the specified default credentials (removed). 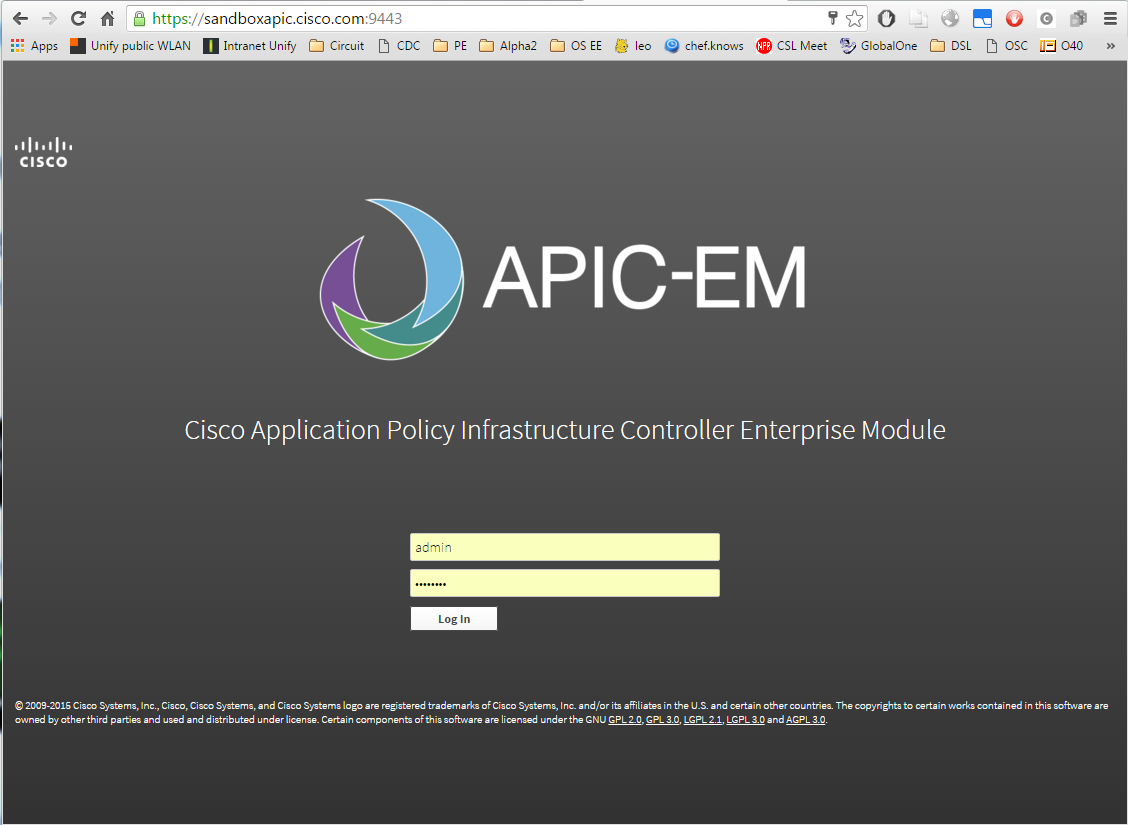 With that, I have reached the APIC-EM portal: 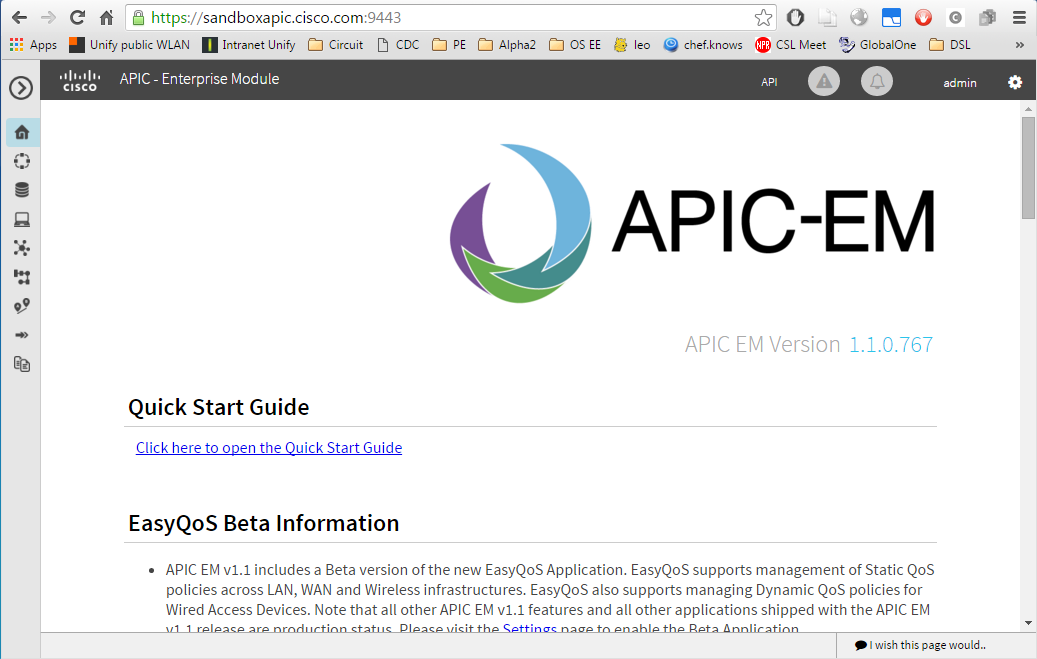 Note: In this example, we will show how to create, read and delete users using Postman, a chrome app for sending RESTful HTTP commands (most important: POST, GET, PUT, DELETE for Create, Read, Update and Delete of an object).

Let us go back to the guided tour on the „APIC-EM DB Only Always-On lab“ we had reached from the lab catalog: on the left pane, we can find a link to the sandbox:

Furthermore, we can find a link to a hello world guided tour in order to explore the northbound REST interface.

There, they are requesting that the user should install Postman. This is the tool I use often to test my ProvisioningEngine and its target systems. Within Postman, I have created a new collection called „Cisco APIC – hello world sandbox“: 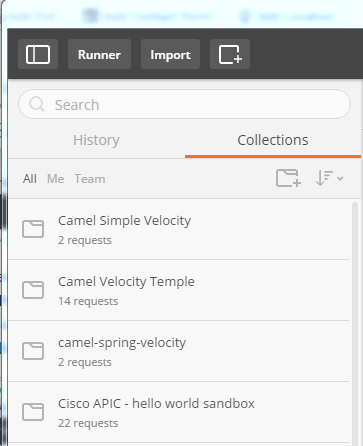 Before sending my first REST commands to the Cisco APIC, I would like to explore the self-documented interface. From what I have seen in the video, I just need to enter the link https://sandboxapic.cisco.com:9443/swagger in a browser. Yes; here we are: 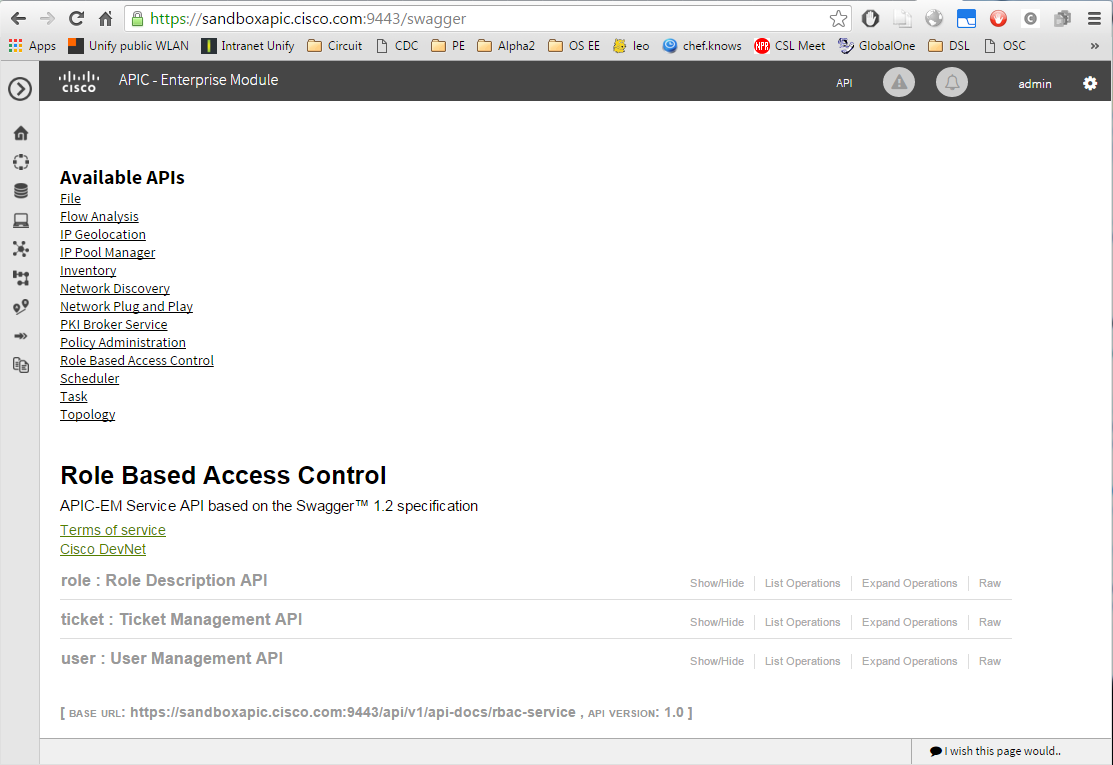 In the hello world example, we will start with the creation of a ticket. Let us explore the ticket documentation:

Init: Creation of an authentication Token

Now, on Postman, let us perform our first real command: creation of a ticket. In Postman, I enter:

After pressing the „Send“ button we get:

Good. So, what do we do with that?

The serviceTicket above then is used as an X-Auth-token for all subsequent requests. Let us use it to show all users:

Do not forget to switch from POST to GET, before you press the Send button.

That was, because I had a double-slash instead of a slash in the URL. After correcting the URL and pressing the Send button again, we get a meaningful answer:

Note: The API developers have chosen to use singular nouns like GET /user. This is a little bit awkward, since a GET /user is returning a collection of users, not a single user. GET /users sounds more natural, especially, if you are used to Ruby on Rails. However, at the end, it is a matter of convention. Unfortunately, there is no agreement on the convention either way and we find popular API examples for both conventions. Fortunately, they have chosen not to mix plural and singular nouns in the URL. Good.

With a little bit of trial and error, I also have been successful in creating a new user entry: 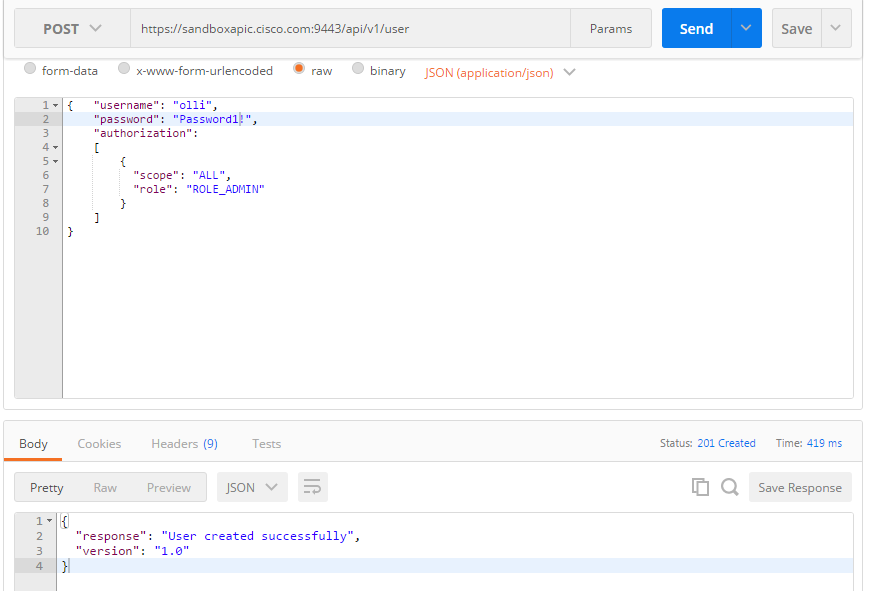 And yes: the user can be seen with a GET /user request as above:

The password seems to be saved more securely elsewhere.

Now, I can log into APIC portal as user „olli“:

Now let us read a single user. This is not straightforward, since the API developers have chosen not to auto-generate and display user IDs. Maybe the username is the ID? Then it needs to be unique. Let us test this first: trying to create a user with the same name: 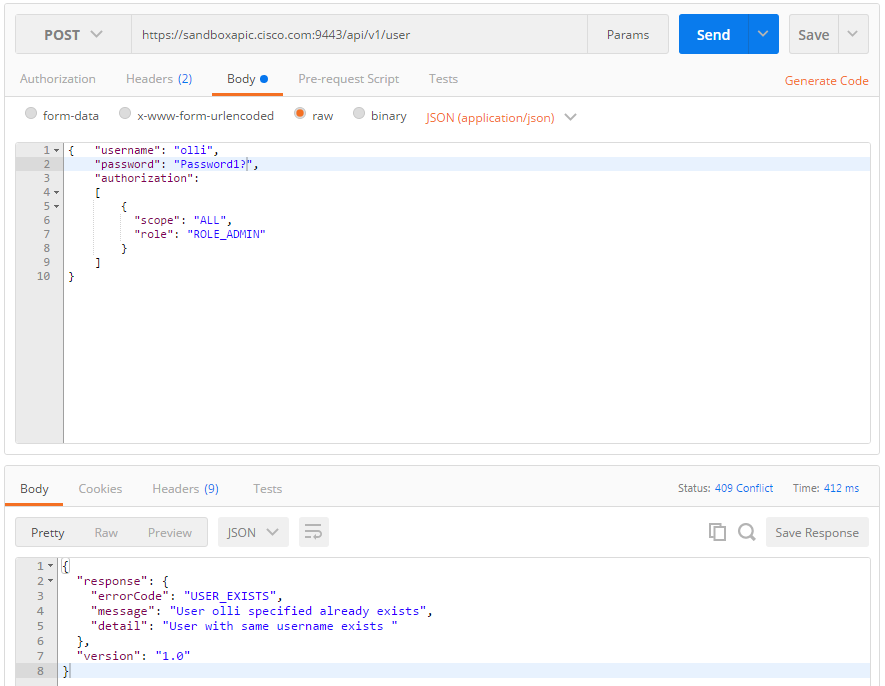 yepp: the username is the unique ID. Following REST semantics, we should be able to read a single user with GET /user/olli: 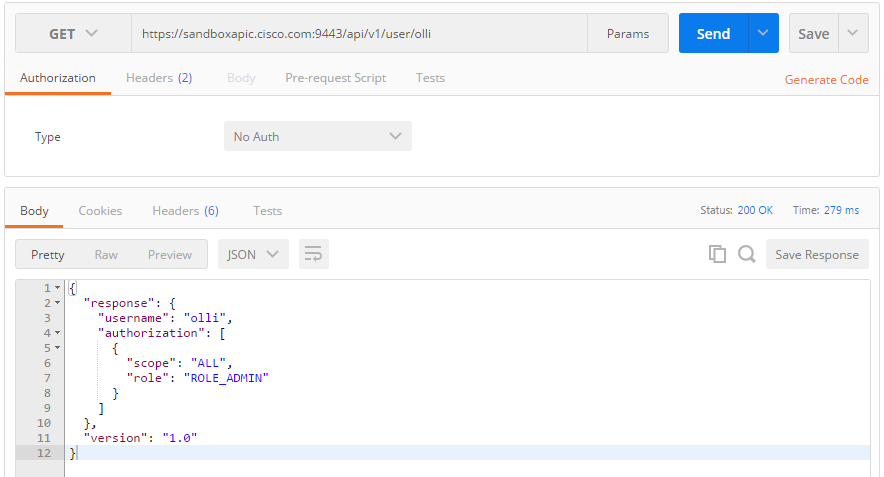 The tricky part is to update the user. From swagger we see that the more obvious syntax

is not supported. We are required to issue the command

without ID, and the ID is specified in the body. This is not following REST API best practices and will be discussed after the Summary. 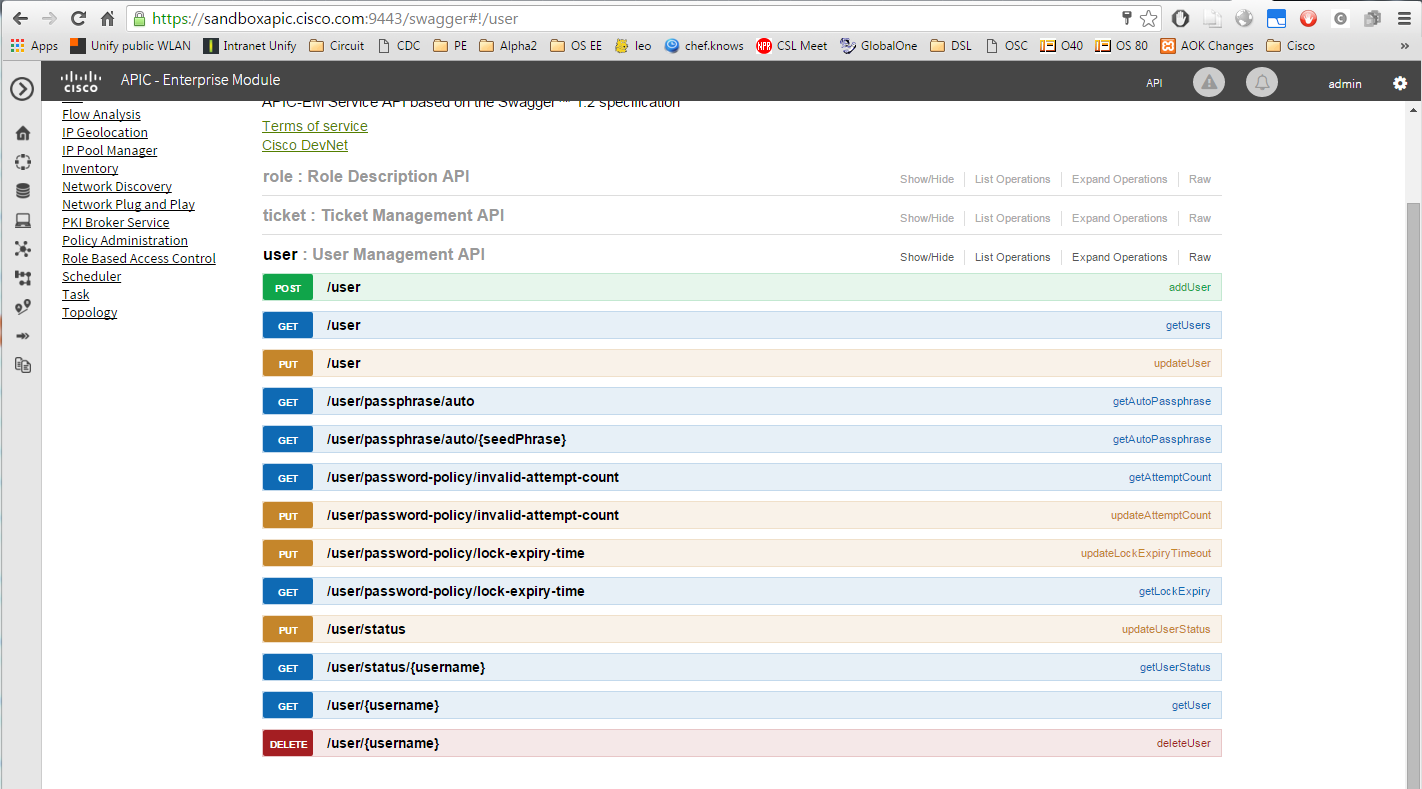 Even if I use the right syntax PUT /user, I am not allowed to change the password of user „olli“ when using an authentication token (ticket) that has been created by the admin: 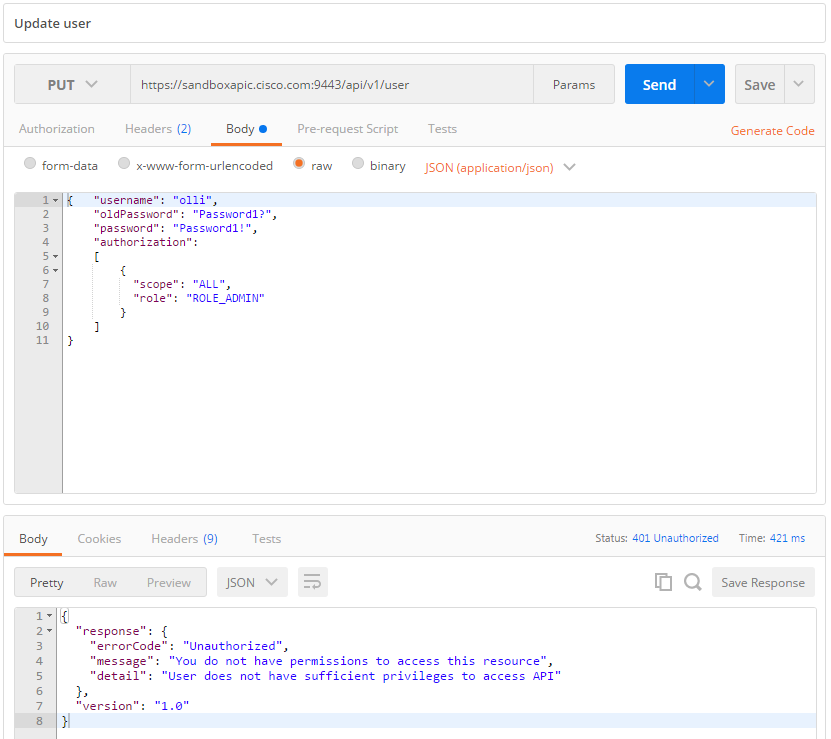 Password change via the REST API is supported only, if you log in as the user in question. Therefore I need to get a new ticket (token) for user olli instead: 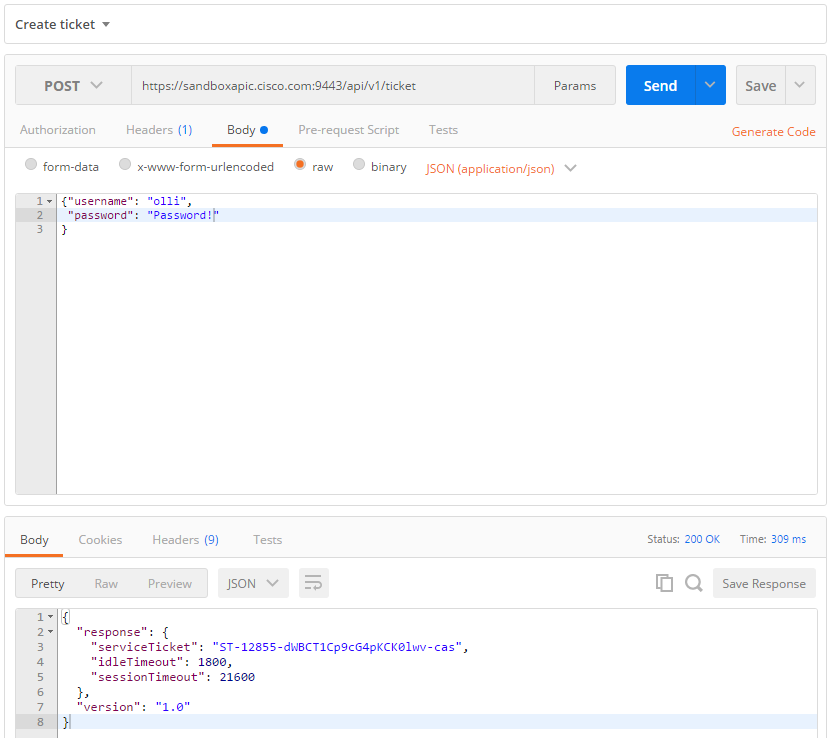 And now we can use the serviceTicket as an authentication token in the update user command:

Note: you need to remove the /olli part from the URL above! 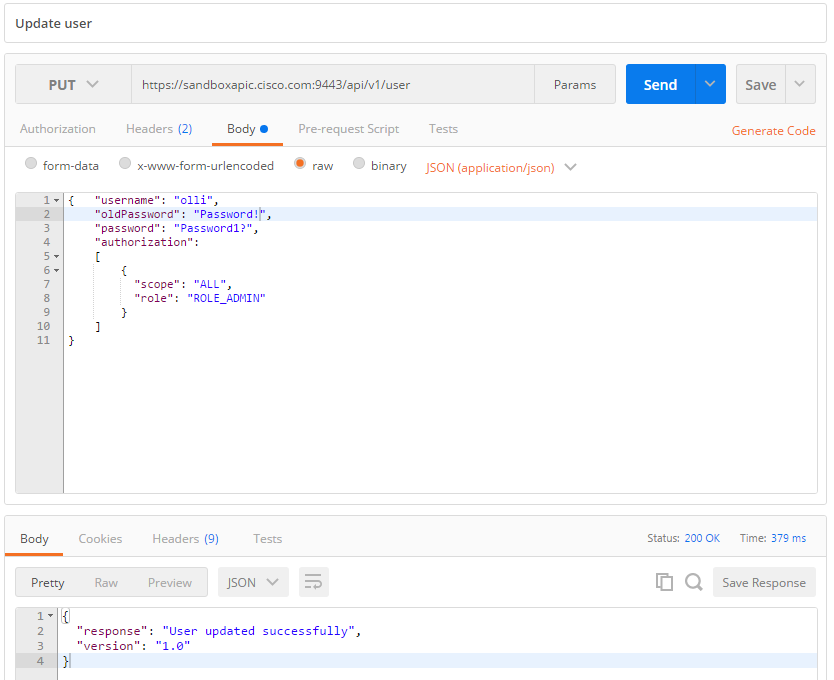 Yesss! That was not easy. I have removed my first unsuccessful attempts, where I had tried with the URL /user/olli in order to simplify the post and in order to not confuse you. 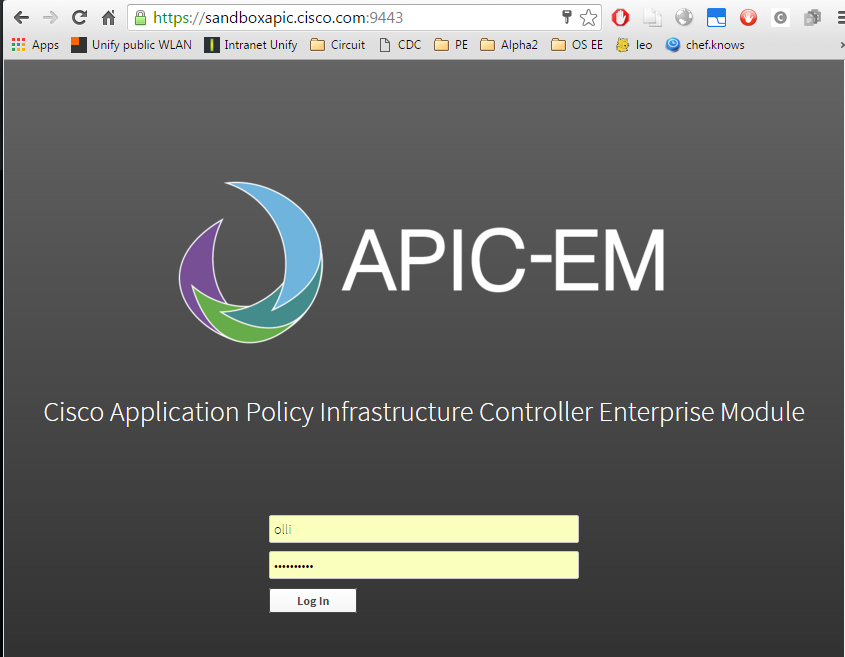 With the ticket (token) of the admin (again), it is easy to delete the entry via DELETE /user/olli:

Note: we have got a 200 OK upon a DELETE request, which indicates that it has been deleted immediately and that the response body is not empty. For asynchronous processing, 202 would have been the right answer HTTP code and for a successful deletion without response body, code 204 is used. See Section 9 of RFC2616.

As expected, after the deletion us user „olli“, a GET /user/olli then leads to „404 Not Found“ error: 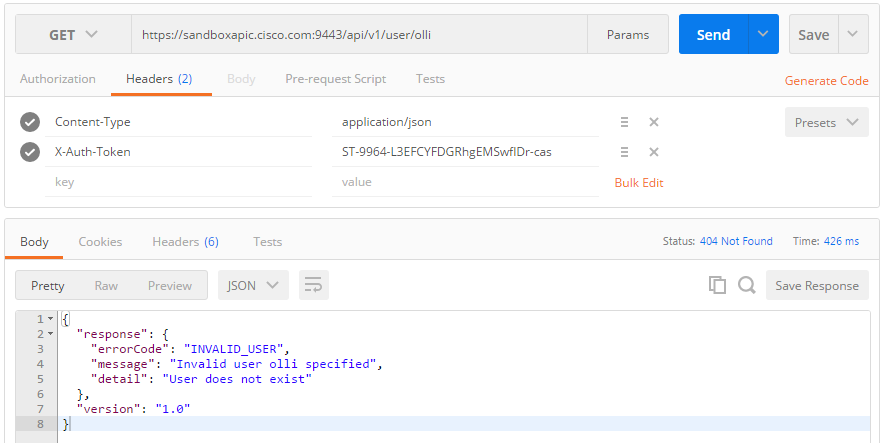 We did not start playing around with Cisco APIC in order to manipulate users, did we? Let us get into the real stuff: discovering and manipulating networks. 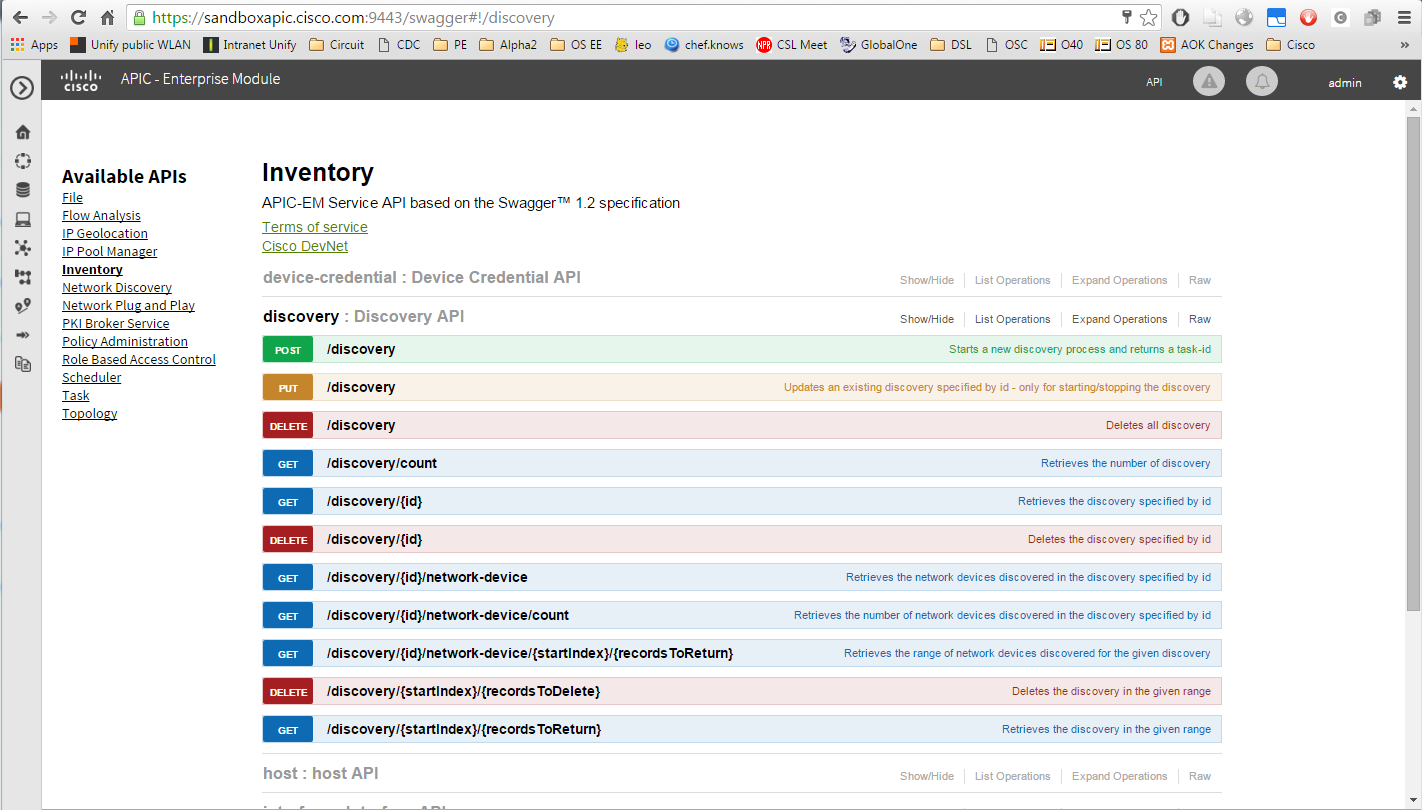 What is missing in the interface, is a GET /discovery to return a list of all discoveries. The only request, which seems to come close is 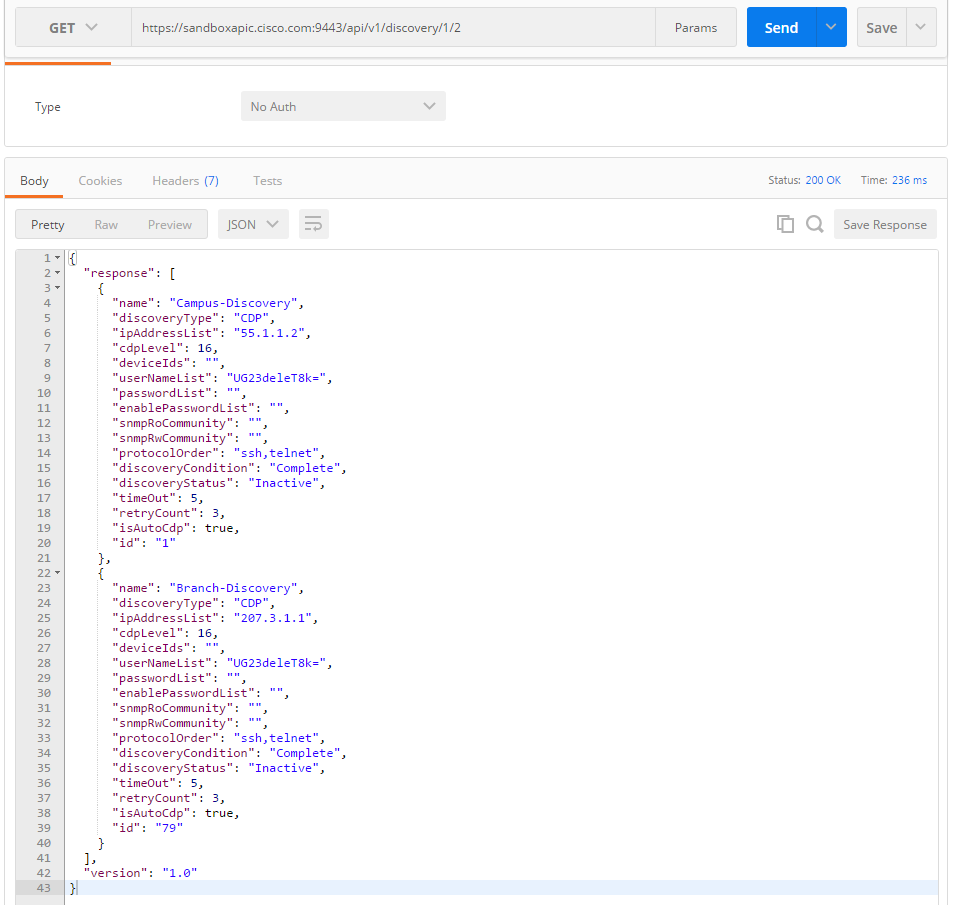 Unlike user objects, discovery objects have explicit IDs. Those are the IDs you need to use, if you want to manipulate a single discovery.

Let us read a single discovery with ID=1: GET /discovery/1 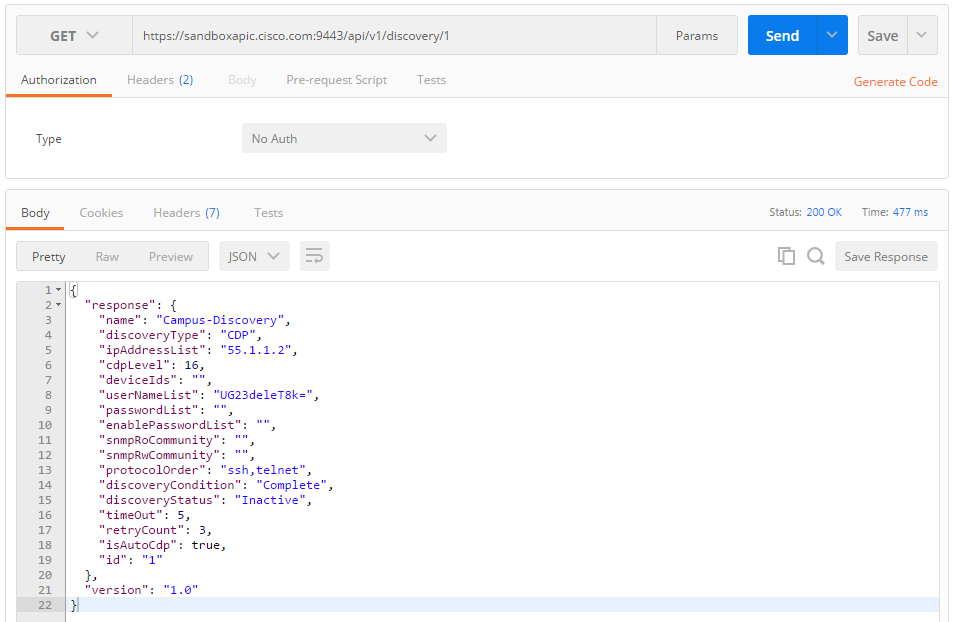 I guess, you need to run a discovery first, which will populate the database with all network-devices, links, hosts, policies, etc. After that, the network-devices can be manipulated.

TODO: clear the network database, run a discovery and observe, what happens.

But for now, let us review the existing data in the network topology database. 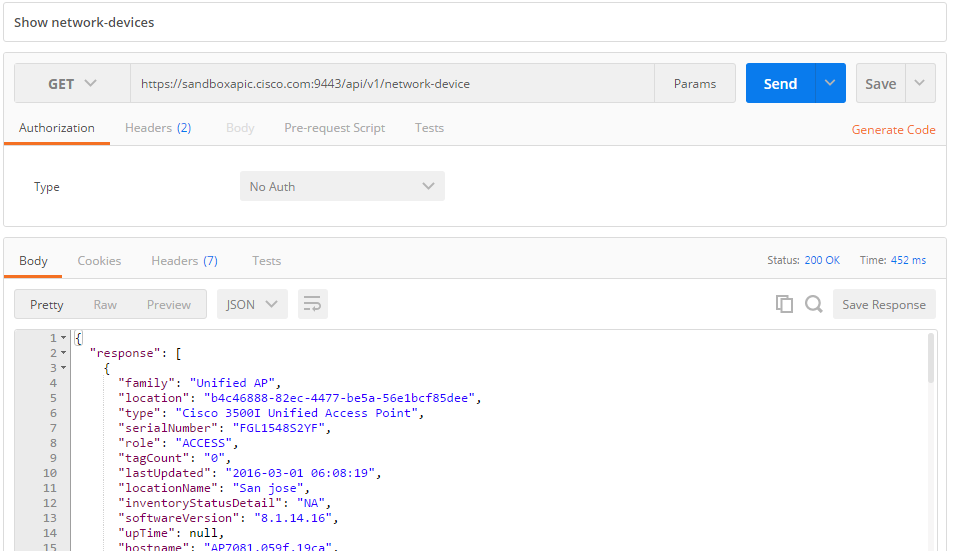 That is interesting as well: we can retrieve the configuration of all known network-devices with a GET /network-device/config: 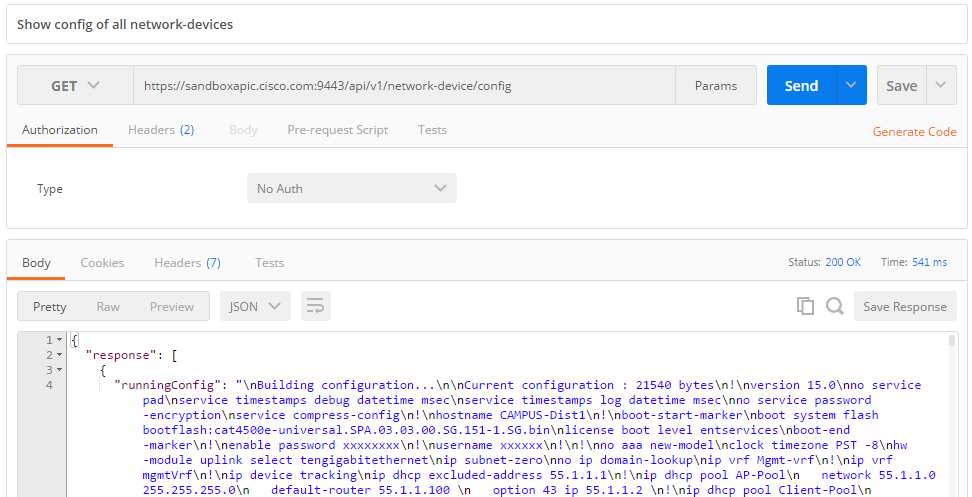 The id of the network device can be found if we scroll down:

However, the config cannot be changed: there is no POST or PUT command defined for /network-device/config: 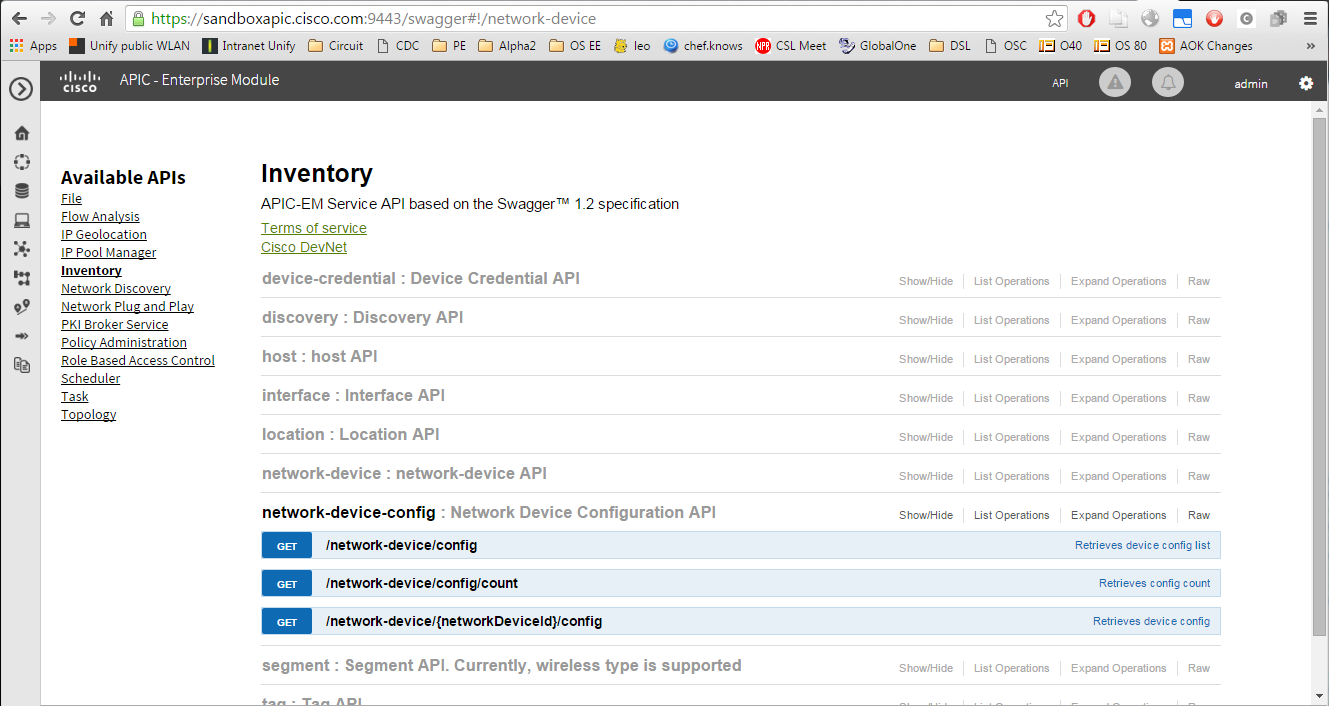 Cisco Application Policy Infrastructure Controller is a software based centralized provisioning system for networks running on Linux Ubuntu that provides administrators with the possibility to manage network policies (Security ACLs, QoS) from a central point using a modern RESTful interface. The software can run on either on physical hardware or on a VMware VM (ESXi V5.1 or 5.5). The resource needs are too challenging to be run on a developer’s notebook: 6 cores and 64 GB RAM (see release notes). However, Cisco offers Cloud based development sandboxes on DevNet. See here a catalog of APIC labs.

Using such a sandbox, we have demonstrated the usage of the north-bound REST API of Cisco APIC (= Application Policy Infrastructure Controller), a controller for automatic provisioning of Cisco based networks. For that, we have used a DevNet sandbox (registration required), a Cisco-hosted lab for developers. We have used the simplest species of those labs that is based on a pre-populated database with no real target network behind (southbound). We have demonstrated on how to

The Cisco APIC offers many more features, which were not yet explored here. Among others, policies can be manipulated.

If you need to download the SW, it can be found via this DevNet page (use IE or Firefox; since Chrome is not supported; click on „3“).

Those are little inconveniences, we can live with, though.